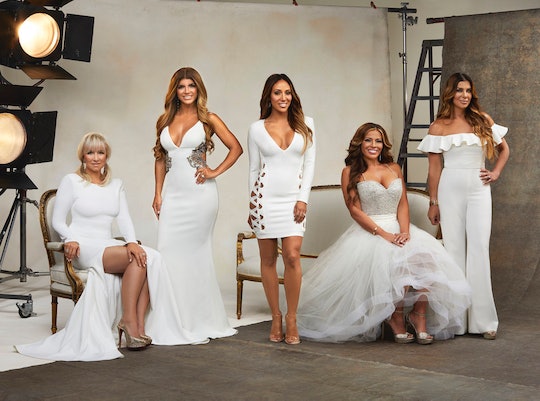 It's hard to believe that The Real Housewives of New Jersey are just wrapping up their eighth season, but people are already excited to find out when the ladies will be back. So when does RHONJ Season 9 premiere? You'll most likely have to wait at least a year to find out how the women of the Garden State are fairing. But don't worry, you'll always have another edition of The Real Housewives to keep you occupied until the Jersey ladies are back on Bravo.

Season 8 introduced audiences to Margaret Josephs, the pigtailed entrepreneur who wasted no time in making her mark on the show. She had a particularly difficult time in getting along with Siggy Flicker, life-coach and Housewife sophomore. Other major events of the season included the tentative friendship between former rivals Melissa Gorga and Teresa Giudice following Teresa's one year in prison. Now that Teresa's husband Joe has started serving his own three years, Teresa now has to be a single mom to her four daughters while dealing with the death of her mother. And just to add another dose of drama, the show decided to bring back Danielle Staub (you know, the woman who caused Teresa to once flip a table) as a friend to the 'Wives.

This season of The Real Housewives of New Jersey premiered in early October of 2017. This is a slight schedule change from previous seasons. In earlier years the New Jersey Housewives seasons premiered in summer or spring. However the show almost always takes at least a full year before it is back on the air. For example, Season 7 (the one in which Teresa returns home after prison) premiered in July of 2016. The eighth season didn't appear on screens until 11 months after the season began. A ninth season of the series has not yet been announced, but if I was to bet, this group of women will definitely be returning in the future.

As for when that return will take place, I predict that this will happen sometime next fall, probably in October or November. You should also keep in mind that the scheduling for the Real Housewives often depends on which of the other Real Housewives franchises are on the air at the time. Bravo tends to stagger the release of these shows so that one premieres while another is in the middle of its season. This means that you always have a Real Housewives show to binge whenever the mood strikes. For example at the moment, The Real Housewives of Beverly Hills and The Real Housewives of Atlanta are both midway through their respective seasons. Atlanta will finish first, and I'm willing to bet that before Beverly Hills wraps up, Bravo will be premiering another season of some other city.

As for which of the women will return for a ninth season, that's still somewhat up in the air as well. I think that mainstays Teresa and Melissa are both good bets to take on another season, while the other ladies are something of a wildcard. Meanwhile, it has also been confirmed that Siggy is leaving The Real Housewives of New Jersey after two seasons. Which may very well be for the best.

Many 'Wives only stick around for a single season — and it's certainly possible that Margaret will be one of those women. Frankly, I'd love to see Danielle return as a main cast-member. Perhaps she'll do a Camille Grammer and go from villain to beloved. You never know.