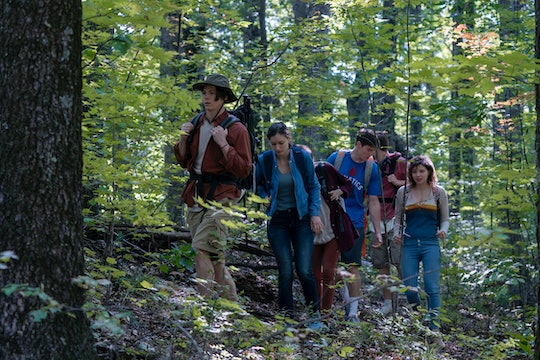 Move Over, 'Lord Of The Flies' — There's A New Crew In Town — On Netflix

There's nothing like a show with a solid mystery to unravel and withThe Society on Netflix you're in for a wild ride. Netflix has come out with some of the best thrillers and teen dramas in the game in the past couple of years (hello Stranger Things and Sex Education) and it looks like this show is no different. So now you need to know when The Society premieres so you can catch it the second it's available (and can talk spoilers with your crew).

Luckily, your wait for this gem of a show is as short as any Bachelor In Paradise relationship (real short). The Society is officially all yours May 10. The 10-episode sci-fi drama comes from showrunner and writer for the likes of Party of Five, Chris Keyser, and Director, Mark Webb (500 Days of Summer). The Society follows a group of teens "mysteriously transported to a facsimile of their wealthy New England town of West Ham," but their parents have all disappeared. This is where the mystery begins as they ban together to figure out what the heck happened and how to get back home.

Netflix described The Society as a "modern take on Lord of the Flies," which becomes clear as they each attempt to form alliances in hopes of survival. If it sounds intense, it is — but in the most entertaining way. And anyway, it's about time someone made the attempt to give this generation a story of power, corruption, and survival among the fittest with a mostly female cast (no offense, Lord of the Flies, but seriously).

As things go along, the group soon finds this newly found freedom is pretty dangerous. Those alliances won't be in everyone's best interest and as the trailer shows, things in The Society move quickly. The show also promises backstabbing, because every good drama incorporates trust issues. Refinery 29 deemed the series "Games of Thrones, if it was about Connecticut Teens," which may describe it even more accurately. The new world order is led by Cassandra (Rachel Keller) with her sister Allie (Kathryn Newton) by her side, while Billie Eilish’s “Bury A Friend” in the trailer really rounds out the creep-factor. The Society may be your next low-key favorite thriller, even as Cassandra's new stance is challenged — putting everyone in danger.

In a post-apocalyptic world, The Society is a tale as old as time: Power, in the wrong hands, is dangerous and will split even the closest-knit group apart. Seeing as The Society is a play on the classic '54 novel by William Golding where a plane crashes, leaving preadolescent boys to figure out how to survive on a deserted island, the connection between the two may not be obvious on the surface but the similarities and themes are definitely there. Collider said The Society provides "a strong basis for a story that can explore class warfare and what makes a society fair, justice, or able to work."

If all of this isn't enough to convince you to tune in to The Society, Netflix's female-centric cast might. With Kathryn Newton (Lady Bird, Three Billboards Outside Ebbing, Missouri, and Blockers), Rachel Keller, Kristine Froseth, and Olivia DeJonge, this updated Lord of the Flies proves the future really is female. I can totally get on board with that.