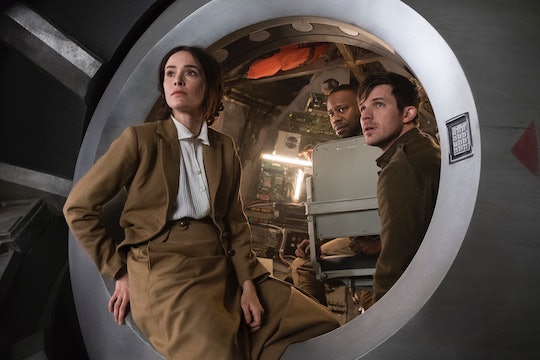 The 'Timeless' Finale Movie Is A Bittersweet Holiday Gift For Fans

Timeless fans, also known as #Clockblockers, fought long and hard to save their favorite show from cancellation. On social media and through fan-funded flying banners, fans campaigned to get another season, but NBC finally settled on making a two-hour movie to wrap-up the storyline. So after months of waiting, #Clockblockers are finally getting something to look forward to, but exactly when does the Timeless finale movie premiere?

The two-hour series finale airs on Thursday, Dec. 20 at 8 p.m. ET on NBC. The movie will see the return of cast regulars including Abigail Spencer, Matt Lanter, Malcolm Barrett, Claudia Doumit, Goran Višnjić, Sakina Jaffrey and Paterson Joseph, and will pick up where the Season 2 finale left off. For those fans who need a quick refresher, or for newbies who want to know what all the fuss is about, the first two seasons of Timeless are available to stream on Hulu.

Season 2 ended on a cliffhanger that killed off one of the show’s main characters, Rufus (Malcolm Barrett). Fans were hopeful that the time traveling team of Lucy (Abigail Spencer), Wyatt (Matt Lanter) and Flynn (Goran Višnjić) would find a way to go back in time to save him in Season 3. But when NBC announced that they were cancelling the show, Timeless fans took to the internet — and the skies — to try to #SaveRufus. In a campaign funded by fans via Twitter and other social media platforms, Timeless fans were able to get a helicopter to fly over San Diego Comic Con trailing a banner with the words “You want to get Rufus back, or what? #SaveTimeless.”

After months of relentless and loyal campaigning, #Clockblockers are finally getting a chance to see Rufus come back to life. The Timeless writers took to Twitter to thank fans for all their campaigning, and promised to give them “a really satisfying conclusion to this 28 episode tale.” However, despite the finale, both the writers and producer Eric Kripke aren’t closing the door on Timeless just yet. “All you have to do is look at Star Trek to see how fandom can increase over the years and revive shows,” the Timeless writers wrote in a tweet. “Our advice is to get folks to watch #Timeless on Hulu and watch on NBC in December.”

In an interview with Collider, Kripke talked about the relevance of the show’s positivity, inclusion and diversity, and revealed that he would be open to giving Timeless a future. “I’m really proud of the message of that show. I’m proud of its heart,” said Kripke. “And everyone else who works on it feels the same. I think we’d be happy to find a way to continue that story.” The producer also noted that while the finale will bring fans closure, it will also leave a little wiggle room for future stories. “There’s a certain amount of shocking turns, and we tried to let it build to something and provide a certain amount of closure, and give you a sense of where these characters go,” he told the outlet. “We tried to put a period at the end of the sentence, but not so much that the door isn’t open for further adventures, down the road.”

However bittersweet it may be, Timeless fans are getting an epic finale for the holidays. "Timeless executive producers Eric Kripke, Shawn Ryan and Arika Lisanne Mittman are promising fans an epic, unforgettable thrill ride through the past, present and future, with a healthy dose of Christmas spirit,” the producers revealed in a press release. “Spread across three centuries and two continents, the finale will test Lucy, Wyatt and the entire Time Team like never before as they try to #SaveRufus, preserve history and put a stop to Rittenhouse once and for all.”

If you’re a #Clockblocker like me, you’re still keeping hope alive for a third season. But for now, one last ride on the lifeboat to #SaveRufus will have to do.