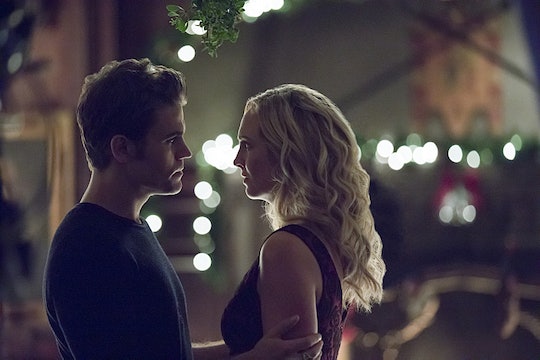 When Does 'The Vampire Diaries' Return? The Season 8 Winter Finale Is Upon Us

If you're anything like me, then the holiday season probably leaves you with conflicting emotions. On the one hand, Christmas is a great time to spend with family and friends (also: presents!), but on the other hand, it also puts a damper on our TV watching selections. Tis the season for hiatuses and unfortunately even our beloved group of Mystic Falls residents aren't immune the break. So when does The Vampire Diaries Season 8 return? Friday night's episode titled, "The Next Time I Hurt Somebody, It Could Be You" will serve as the show's midseason finale. But luckily for us, the departure won't be quite as long as that episode title. (Thank goodness!)

According to the show's IMDB page, The Vampire Diaries is scheduled to return on Jan. 13, 2017, which means fans will have to go a little over a month without their beloved vampire brood. And while that thought is more than a little depressing (especially considering this is the last midseason break this show will ever see), I'm just glad the wait won't be too long for us to go without our vampire fill. Not just because I love these characters, but also for the plain fact that if I'm away from it for too long I'm going to totally forget everything that's happened.

That being said, I very much doubt TVD will deliver anything less than a memorable winter finale. I mean, considering these last few episodes have ended in major plot twists (Tyler's death, Damon's suspicious looking death), it seems unlikely that Friday's episode won't deliver in a similiar, action-packed way. And knowing TVD like I do, it's almost guaranteed to end in a cliffhanger that will leave all of our jaws dropped on the floor.

Whether the twist will be a visit to hell itself or revolve around the highly anticipated (and hoped for) return of Elena and/or Katherine has yet to revealed. But I've never known this series to disappoint its fans, so regardless of what exactly goes down, it's bound to be exciting.

Last we saw, Damon and Stefan made a deal with Cade, agreeing to serve as his new siren-like servants for all of eternity in exchange for the safe release of Alaric and Caroline's twin girls. So where does this leave them now? It's definitely not a great situation to be in and could very well mean the end for Caroline and Stefan. (I doubt the devil's vacation policy is that great, especially when it comes to planning honeymoons.)

So will the wedding never happen? How can Damon and Stefan possibly get themselves out of this latest nightmare? I have a feeling the winter finale will give us a better sense of where things will go from here. Until then, it's anyone's guess.