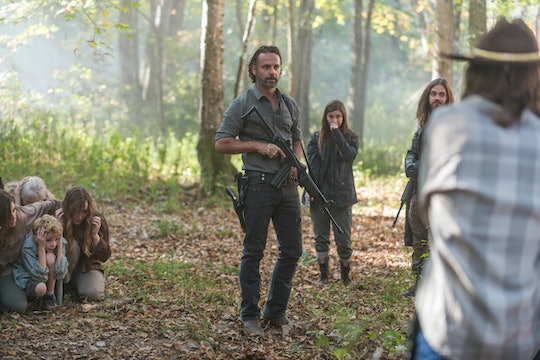 The Walking Dead has been hit or miss this season among much of the fan base, but it's finally coming to an end on Sunday with the April 2 finale episode. "The First Day of the Rest of Your Life" is set to be the climax of tensions that have been rising since Negan and his Saviors were first introduced to Rick and his group of survivors in the gory and much-hyped Season 7 premiere back in October. Though the current season isn't yet at an end, many are already wondering: When does The Walking Dead return for Season 8?

AMC is definitely not playing around when it comes to what's by far their most popular and enduring original series (in the wake of Mad Men and Breaking Bad having ended their runs several years ago) — the network announced its Season 8 renewal back in October. In fact, the upcoming season of the long-running zombie apocalypse drama was renewed a week before Season 7 had even premiered — you know, that better, sunnier time before we all had to face the harsh reality that Negan had gruesomely killed both Abraham and Glenn (sob).

In its write-up of the renewal news, Deadline revealed that the eighth season of the show would premiere with the series' 100th episode and would have a total of 16 episodes to its name — the same number as The Walking Dead Season 7. Many news outlets have reported that the show will be returning in Fall 2017. At this point, it's too early for AMC to have released a premiere date, but based on previous season premiere patterns, it's easy to guess when the new season will premiere.

Unless something unexpected goes down with production, The Walking Dead is virtually guaranteed to return with new episodes in the month of October. Every one of the show's existing seven seasons has premiered in October as well, so odds are the series will return at the time when we've come to expect it. The earliest a season has ever premiered was Oct 11, while the latest was Oct 31, so odds are the upcoming season's premiere date will fall somewhere between those two dates.

As for what we can expect from the upcoming finale and Season 8, if the show's overall consistency with the comics holds true, it seems like the "All Out War" arc will comprise the majority of the new season. Based on what we've already seen of Season 7, that should kick off with the finale. Scott Gimple, the showrunner, also confirmed in an interview with Entertainment Weekly that "the finale will have an ending of sorts, while also setting the table for Season 8."

It seems clear already that Season 8 will be one to watch for fans.