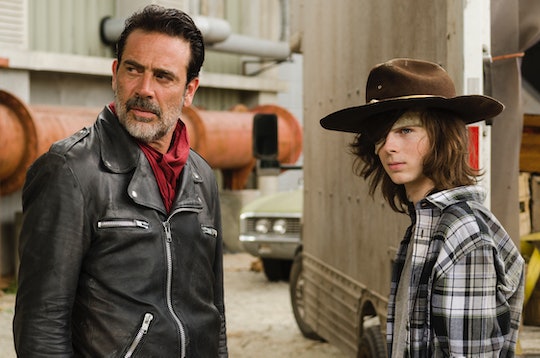 When Does 'The Walking Dead' Return? Season 7 Is Taking A Break From The Bloodshed

It feels like only yesterday when we were all sitting in our living rooms with our jaws dropped to the floor as Negan took out two beloved characters with the help of his mighty barbed-wired bat, Lucille. Yes, it's a moment that will probably forever haunt my nightmares (especially that final image of poor Glenn), but now that the holidays are just around the corner, The Walking Dead midseason finale is upon us, meaning we'll get to take a little break from all of the bloodshed and mayhem. If that's the case, though, then when does The Walking Dead Season 7 return? I'm not going to lie to you, it's going to be a little bit of a wait.

Granted, it's not as if Walking Dead fans are used to waiting around for the series to return. It was torturous to go all of those months not knowing who Negan killed. So at least the hiatus is going to be shorter than that this time around. According to IMDB, The Walking Dead will return on February 12, 2017, which means we just have a little over two months to go before receiving our next zombie fix. (Though, honestly, do we even see that many zombies on the show anymore? They're starting to feel like background props.)

Two months certainly seems doable, especially when you think of shows like Sherlock, which sometimes take years to return with another season due to Benedict Cumberbatch and Martin Freeman's constantly growing popularity. However, I'm getting slightly worried that the series is going to leave us with yet another cliffhanger that will make the hiatus excruciating.

Based on Sunday night's promo, Negan is about to put Lucille to good (or rather bad) use once again. In the clip, you can see a newly shaved Negan walking away with his might bat over his shoulder and a fresh splatter of blood on his chin. And, of course, there's also the horrified look on Rick's face to consider as well. Could this mean that Negan has killed another core member of the team? Will it be one of those times where we just don't know who it is until the show returns? Hopefully not, otherwise it would seem a little repetitive.

But still, the midseason finale is bound to come with some epic surprises and shocking twists. So if you think the wait is long now, just imagine how you'll feel when the closing credits start to roll. This entire season has felt somewhat tame, with a lot of cowering and giving in to Negan's demands, but I'm betting the winter finale will find our characters finally start to take some serious action. And if they get caught, you better believe someone's going to have to pay the price.