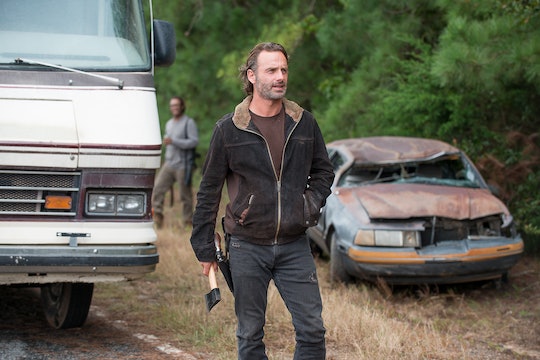 When Does 'The Walking Dead' Season 7 Premiere? The Countdown Is On

That was one hell of a finale. Not every fan will be happy with the polarizing outcome of The Walking Dead's sixth season, especially following on the heels of similar cliffhangers earlier in the season. The sixth season ended with new villain Negan swinging his bat with murderous intent at one of Rick's crew, but viewers didn't see who it was and the camera cut to black before we could. It'll be a relief to know when The Walking Dead Season 7 premieres and you can find out who met a horrible end.

The show is guaranteed another season considering its incredible popularity, but it's a little less certain when exactly that season starts. DenOfGeek hypothesized that because the show usually premieres on the Sunday of New York Comic Con, that would be a good way to tell when the next season starts. New York Comic Con runs from Oct. 6 to Oct. 9, which would mean the seventh season of The Walking Dead would begin October 9.

There's very little we can know about a series that does its best to keep spoilers on lockdown, but it seems a safe bet to say that Negan is going to be the threat to beat. So many things are up in the air, aside from the mystery of who died, like: how the hell are Rick and his remaining crew going to get away from the seemingly endless cavalcade of Saviors? How will they fight off such insurmountable foes for an entire season, and will they ever be able to win? You're going to have a long time to think about it, but answers aren't going to be easy to come by.

In a clip for The Talking Dead, Lauren Cohan said the finale was one of the hardest episodes they've had to shoot so far. She also wished that there was a way we could all come back next season and have everything just be okay somehow. Me too, Lauren. Me too.