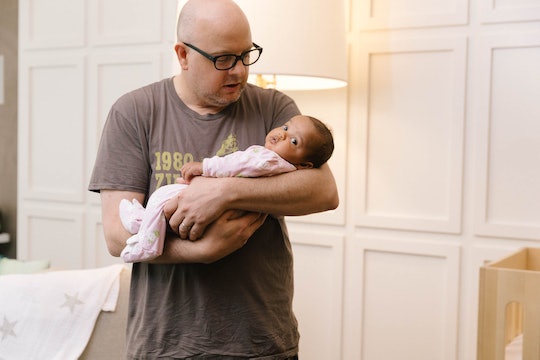 Ask my mom and she will tell you the story about my tendency to lose my sh*t if I was out past the hour of 7:30 p.m. when I was a toddler. She called it my "witching hour" and, while it's a concept typically reserved for infants, people who witnessed my erratic behavior might have been convinced otherwise. Like my newborn sisters and brothers, I simply had no tolerance for that particular time of day, which was a sad truth for my patient parents. Which leads me to wonder, when does the witching hour end?

According to Practically Perfect Baby the witching hour — which is typically the evening hours behind 6 p.m. and 10 p.m. — generally starts around 2 to 3 weeks old, peaks around 6 weeks old, and ends between three to fourth months old. But let's back track for a short history lesson: According to The Bump, European folklore says the witching hour was "coined for the hour between 3 a.m. and 4 a.m. when the Catholic church didn’t have any prayers or services going on — an optimal time for evil spirits to materialize."

That might sound a bit sinister, but if you have ever been on the receiving end of a child's witching hour ways, then you know it's not far off. "It lends itself really well to newborn babies, older than 3 weeks of age, who get fussy at a certain time of day on a regular basis for seemingly no reason," The Bump noted.

Also important to note: The witching "hour" is a bit misleading. In fact, Mom Tricks pointed out that, sadly, the this period of fussiness often lasts 3 to 4 hours or more at a time.

And there's not really a reason for it, the website noted. Colic, tummy trouble, overtiredness, and overstimulation might be to blame, but it's tough to pinpoint the exact cause. "Babies can easily become overstimulated due to all of the sights and sounds around them, and this is even more aggressive during the day," Mom Tricks said. "While your baby isn’t necessarily taking part in all of the action, it still has an effect on her, which in turn can cause fussiness."

Which is reason enough to give a few tried and true tricks a shot. The Baby Sleep Site recommended first focusing on sleep and making sure you are laying a solid foundation for them to score some snooze time. Bouncing your baby while holding them or wearing them around the house while cleaning up from dinner also helps them to calm down.

If you suspect stomach issues may be to blame for your baby's fussiness, then try burping them. And if you are breastfeeding, then take note if you notice a pattern of your little one becoming upset after you eat certain foods.

Parenting also suggested that if you work away from home, then you might want to take some time to make your own transition between leaving work and arriving home. "Working parents tend to race home at the end of the day and arrive already frazzled from their commute," the magazine said. "But if you take care of your own needs before you have to switch into Daddy or Mommy mode, you'll be in better shape to handle what's ahead."

Consider parking in the driveway and spending five minutes in the car to unwind. You might also want to consider nixing complicated dinners and swapping television for a low-key art activity, Parenting noted.

Because if there's one thing you would rather trade "the witching hour" for it's all the things "low-key."