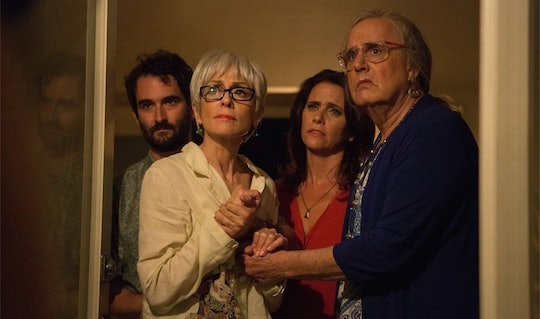 The Future Of 'Transparent' Is Secure

It's no surprise that Amazon's longest-running and most-awarded original series Transparent earned a fifth season pickup before Season 4 even premiered on Amazon Prime. The Season 5 renewal was announced on Thursday, Aug. 24, a full month before the Season 4 release, and just a month after the Season 4 premiere date was revealed. If you've already polished off Season 4, you may be wondering: when does Transparent Season 5 premiere? It stands to reason, based on the late announcement of the Season 4 premiere, that fans won't hear about Season 5 for awhile. But here's what you can gather from what we, as fans, do know.

Transparent typically premieres in late September: Season 1 premiered on Sept. 26, 2014, Season 2 on Dec. 11, 2015, Season 3 on Sept. 23, 2016, and now, Season 4 on Sept. 22, 2017. Although there was that one Season 2 outlier, my money's on the fourth Friday in September 2018 for a Season 5 premiere. According to The Hollywood Reporter, Season 5 is slated to begin production early next year, with a premiere date later in 2018. There's no news yet on whether series creator Jill Soloway's second show for Amazon I Love Dick has been renewed for Season 2, which might require some shifts in scheduling to accommodate the overlapping cast and showrunner.

Transparent got more exciting news this year ahead of the Season 4 premiere: starting Aug. 9, 2017, the show would begin airing on SundanceTV. That makes it accessible to cable subscription holders for the first time, potentially expanding its audience far past its Amazon Prime viewership.

Soloway has said that Season 4 would be a "political" one, "crossing borders and boundaries." Of course, the Pfefferman's have long struggled with boundaries, and we finally see Josh say it to his mom Shelley's face in the Season 4 trailer. As for the "borders" tease, it's a reference to the fact that Season 4 takes place on-location in Israel! Maura travels to The Holy Land in search of information about her family and makes a startling discovery. Of course, in light of this juicy info, the rest of the Pfeffermans all make the pilgrimage and join her there.

Other Season 4 surprises include an appearance by Alia Shawkat, who plays a love interest for Sarah's ex-husband Len, and the revelation that Maura is dating a man named Donald. (That name choice can't be a coincidence.)

We are honored to share the trailer for Transparent Season 4. We feel very lucky to get to make art inspired by themes of love, home and boundaries, and how they operate in both human beings as well as nations. Sharing this work amidst President Trump’s continued assault on the transgender community is painful. We are outraged that he announced in a tweet that transgender people would not be allowed to serve ‘in any capacity’ in the U.S. military.

...At Transparent we believe in the integrity of the trans community, which we know firsthand because we are all either trans or allies to the trans community. It is a revolutionary act for a trans person to simply leave the house and walk down the street. We tap into the incredible history of survival the trans community has achieved against all odds, knowing that our fight is noble and on the side of justice and human rights.

Wherever the show is headed in a post-Trump world, you can bet it will stay sharp, compelling, and critical.