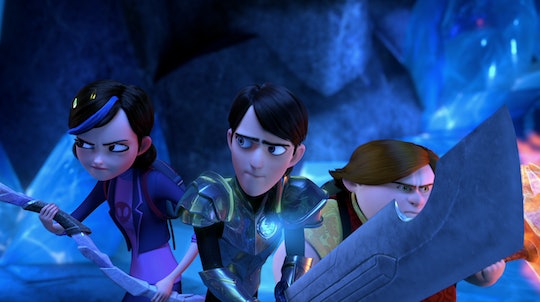 Netflix's 'Trollhunters' Is Nearing Its End

The second season, or Part 2, of Guillermo del Toro's Trollhunters is finally here. In the second season, fans will follow Jim as he continues his mission as the Troll Hunter, the champion of the hidden world of Trolls and the human world of Arcadia Oaks. Although the second season has only just arrived, it's not surprising that some people are already asking for more. So when does Trollhunters Season 3 premiere? Thankfully, the show has already been renewed for a third installment.

According to Variety, the third and final season of Trollhunters will debut sometime next year in 2018, though there's been no official date set just yet, which is to be expected since the second season just came out so recently. Along with the final season of Trollhunters, del Toro's next animated series, 3 Below, will also be released on Netflix in late 2018. The new series is the second installment of the Tales of Arcadia trilogy del Toro has planned, with Trollhunters being the first.

In this segment, two royal teenage aliens and their bodyguard are forced to flee from their home after a surprise takeover by an evil dictator. The trio then crash land in Arcadia, and have to learn how to adapt to high school while also attempting to fix their ship so they can get back home and protect their planet. Following the release of 3 Below, the final installment of the Tales of Arcadia will be Wizards, which is set to debut in 2019.

It's unclear just how much each installment will connect to the other and if there will be crossovers between the three series, but for now it's just exciting to know this is only the beginning for this world. Trollhunters is a massive hit for Netflix, and even won six Daytime Emmys this year. No doubt the second season will be just as good as the first, if not better, and it's already received rave reviews.

While Trollhunters may be considered a kid show in theory, it's really for everyone. It's filled with adventure, battles, a smidgen of romance, and a lot of laughs. However, unlike the first season, which was an incredible 26 episodes, Season 2 will only consist of 13 episodes total. Don't feel like you're missing out, though. These new episodes will be sure to captivate you just as much as the first season did, but will simply focus on a smaller group of characters, specifically Jim, Claire, and Toby. The trio, along with their troll allies, will fight against the evils of Gunmar and other villains who are revealed over the course of the season.

Additionally, although Anton Yelchin, who portrayed the voice of Jim, died in a car accident last year, it will still be his voice you'll hear in the second season. Del Toro refused to replace him and thankfully most of his dialogue was actually already recorded for the second season. Therefore, Jim will still be the same character you're used to, although it's unclear what del Toro plans to do for the third and final season. For now though, Yelchin continues to live on in Trollhunters.

Along with Yelchin, you'll also hear Kelsey Grammer as Blinky and The Walking Dead's Steven Yeun as Steve Palchuk. Also having recurring roles in the second season are Star Wars' Mark Hamill and Game of Thrones stars Lena Headey and David Bradley. With such an amazing cast, it's no surprise that Trollhunters continues to wow fans.

More Like This
'Workin’ Moms' Season 7 Is Reportedly In The Works! Here’s Everything We Know
Exclusive: Three Siblings With Super Powers Protect National Parks In Spirit Rangers
'Squid Game' Is Coming Back For Season 2 On Netflix: Here’s What Parents Need To Know
Kid First Responders Rescue Puppies In Disney’s Cute New Series