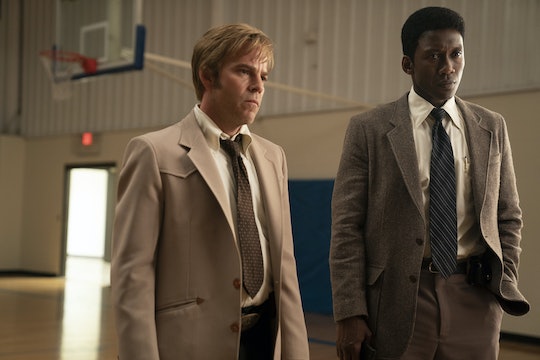 The first season of True Detective was a runaway hit for HBO and its most eminently quotable line of dialogue was unmistakably "time is a flat circle." After a less-than-impressive Season 2, the series returns to that idea for the third season, which boasts Mahershala Ali and Stephen Dorff playing the partners at the center of the story. So viewers may be wondering: when does True Detective Season 3 take place? The storyline will actually play out across three different time periods.

The tale begins in 1980, when detective Wayne Hays, played by Ali, and his partner Roland West, played by Dorff, are sent to investigate a missing persons case in the Ozarks. A twelve-year-old boy and his ten-year-old sister have gone missing after taking their bikes out one afternoon, and the search for the missing children brings together Hayes and the boy's English teacher, Amelia Reardon. Another part of the story is told in 1990, which finds Wayne and Amelia married with two children. She's just completed a nonfiction novel about the case, but new evidence arises which undoes the conclusion Wayne originally came to when first investigating.

Finally, in 2015, Amelia has died and Wayne is a dementia-stricken retired detective. Someone making a true crime documentary about the 1980 case has approached him for research, and Wayne is forced to sift through his fading memories. The documentary-making process inspires him to try solving the case again, but with his faulty memories, he's forced to seek out his former partner — now living alone and nursing an alcohol dependence — for help.

It's clear that Wayne and Roland have suffered a falling out, but the show keeps what exactly happened between them, as well as the details of how the case had previously been resolved, a secret at the start. Hayes tells West that he wants to take another look at the case, using the help of his deceased wife's book to jog his memory and look back over the evidence with a fresh perspective.

"Among the suspects are a crew of snotty teen-agers, an older cousin with the demeanor of a creepy uncle, an unidentified one-eyed black man, the institution of Catholicism at large, and a Native American waste picker who explains that he could not readjust to civilian life after his return from Vietnam," according to the New Yorker.

Both Ali and series creator Nic Pizzolatto told USA Today that the latest installment in the anthology series takes a much less noir approach than previous seasons. "There’s a light about this season, especially in later episodes," said Ali. "There’s a hope in this one that’s very different from the previous seasons.”