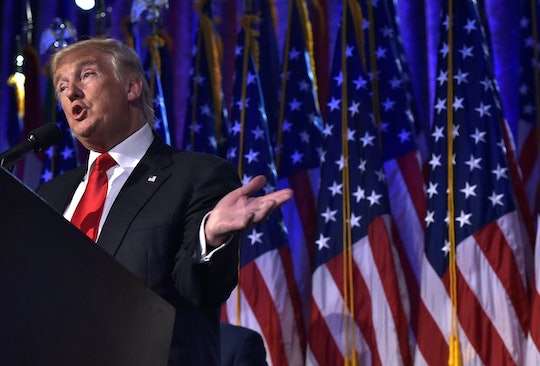 When Does Trump Take Office? Trump Will Head To The Oval Office Next Year

This past week determined that Donald Trump would lead the country as President of the United States for next four years. The results were less than stellar for some and this past week has not been easy for those thinking about the consequences of a Trump presidency. But for those wondering when does Donald Trump take office, they should note that they have plenty of time to plan their escape out of the country — just kidding, of course.

Americans looking to escape to Canada or out of the country for the next four years in fear of a Trump presidency have plenty of time to figure out how they will leave the country. That is, of course, because Donald Trump won't actually take office until next year — so everyone can let out a collective sigh of relief for now. While there will be a lot of talk about Trump's cabinet or his advisors for the next few weeks on TV, it is all talk and won't actually mean anything until a little bit later. That is, of course, because Donald Trump won't officially take and hold office until Inauguration Day at 12 p.m., according to Mic, which is on Friday, Jan. 20, 2017 — thank god.

Any fears that people have about what will happen once Trump goes into office can be held off for the holiday season. And this means that any major action that Trump has threatened to take will not happen until late January and February of next year — not that a few months will make a difference about how fearful people will be.

Before the Trump family can make themselves at home in the White House, they have to take part in the Inauguration Day festivities, first. According to Billboard, the Inauguration is a day long celebration that will begin with a morning worship service before the Vice President and then the President swear in in front of the thousands of people who come to watch. Then, Trump will give a speech, there will be a parade, and there will be plenty of musical performances. It is truly a celebration.

Once Inauguration Day is over is when Trump's presidency will truly begin. On Wednesday, Trump outlined his plans for his first 100 days of presidency — and it looks like he wants to accomplish quite a bit. According to CBS News, even on Trump's first days he could do quite a few major things — like select a conservative judge to fill the vacancy on Supreme Court.

A Trump presidency will not be easy for a lot of people. Rest assured, they can get through the holiday season knowing that Trump won't take office until January of next year.