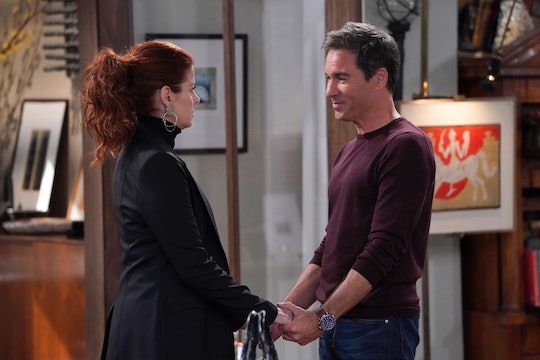 'Will & Grace' Season 10 Will Take A Brief Hiatus

The holiday season brings with it many things: pretty decorations, thematic Starbucks drinks, and a total dearth of television. Will & Grace is one of many shows taking a hiatus, though it should be back before you know it. But if you're desperate for something to watch, you may find yourself counting down the days until your most beloved resurrected sitcom returns. So what day should you circle on your calendar? When does Will & Grace return?

An official announcement hasn't yet been made, likely because the Season 10 fall finale hasn't aired yet. Once "Anchor Away" premieres on Dec. 6, a return date is sure to follow. But a glance at the previous season's schedule could give some indication of when it might be back. Season 9's airdates differ slightly from Season 10's, but they are just similar enough that it could act as a guide. Season 9 debuted in late September, then took a break in early December after its seventh episode; it was back by Jan. 4 to finish out the season. This year the show started a little later in early Oct., but is taking its break pretty much at the exact same time. That means it will likely return in the first week or so of January 2019. That's just a theory, though.

The eighth episode of Season 2, "Anchor Away," revolves around some silly scheming. According to TV Guide, one half of the episode will follow Will's attempt to get the attention of a TV news anchor (guest star Matt Bomer!) who prefers his men on the frivolous side. Obviously, Jack is the perfect person to help Will with his transformation into someone ditzier. Meanwhile, Karen discovers that her alimony won't be as bountiful as she thought — unless she can get photos of Stan with the inimitable Lorraine Finster. She decides to get Grace's help with that mission.

It doesn't quite sound like a fall finale, but there are ten more episodes left in the season (bringing up the grand total to 18). And there will be more to come after that, too. NBC already renewed Will & Grace for Season 11 back during Season 9, making the upcoming season its third since being brought back from cancellation. It's no surprise that the network is holding onto it, since TV Line reported that it's NBC's top-rated sitcom. Its initial return in Season 9 had 10.2 million viewers, and even though numbers have dropped a couple million, it still has an impressively huge audience.

Will & Grace won't be going anywhere for the foreseeable future, so even if it's taking a brief hiatus now, it will be back soon. It might be a matter of weeks before Season 10 continues, bringing with it all the laughs (and surprisingly heartbreaking moments) that have been the show's hallmark since it first debuted decades ago. You may miss out on Will & Grace during the holiday season, but it'll be back to help you settle in to the new year.