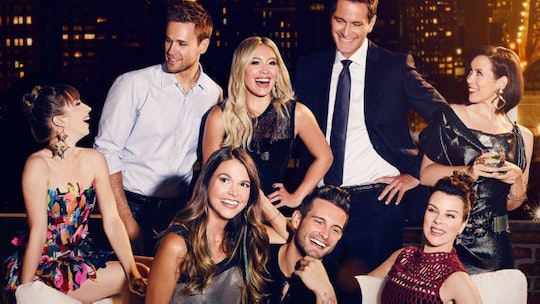 When Does 'Younger' Season 4 Premiere? Liza's Journey Is Far From Over

Believe it or not, my friends, but the Younger Season 3 finale is upon us and with that comes the realization that we are once again about to embark out on a world without Liza & Co. So naturally, the next question on everyone's mind is when does Younger Season 4 premiere? Notice that I'm asking when and not if because yes, I'm pleased to say that the series has already been granted another season renewal. In fact, the pick-up was even announced prior to Season 3's debut, which just goes to show how much fans adore the series. So fear not, diehard TV watchers — Younger may be leaving our television screens for now, but it's not goodbye forever.

However, that still doesn't answer the question of when we can expect the show's fourth installment to kick off. And while it's true that no official Season 4 premiere date has been announced, I'm tempted to venture a guess that the series may stick with its latest programming schedule and air sometime in the fall of 2017. But, of course, this is just a mere prediction on my part, so take that with a grain of salt, especially considering the fact that the series has never premiered at the same time (or even in the same) month for more than one consecutive season.

For its series premiere, Younger debuted in March of 2015. Meanwhile Season 2 premiered in January 2016 followed by the Season 3 premiere, which kicked off this fall in late September. So as you can see, it hasn't exactly presented us with a helpful pattern. So really, it could come even sooner (or later) than we may think. Hopefully, the series will help to ease our curiosity after its hour-long season finale this Wednesday. Normally, when a show is about to go on a hiatus, it leaves its viewers with a slight tease as to when they can expect the show to return. I'm hoping Younger will do us a similiar courtesy.

In the meantime, though, I'm sure the writers will leave us with some very exciting plot twists to think about. Will someone else find out about Liza's secret? Is she ever going to give into her feelings for Charles? Could the baby factor come in between Josh and Liza's currently thriving relationship? We'll find out soon enough and thanks to a guaranteed Season 4, there's going to be plenty where that came from.