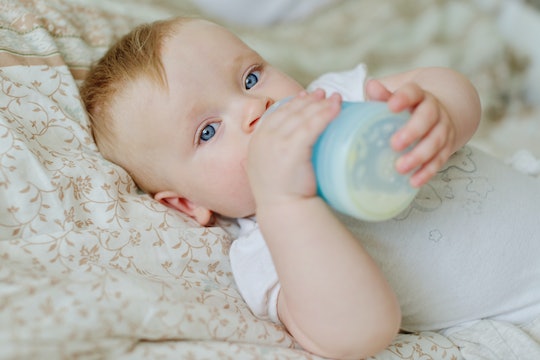 For parents whose little ones are in love with their bottles, the weaning process can be... well, it can be a nightmare. To a baby, a bottle is about more than just food: It's comforting, it's familiar, and it may very well be the only way your little one knows how to go to sleep. But nothing lasts forever, and the time will come when it's time to toss those BPA-free nipples. So when does your kid need to stop bottle feeding for good? At a certain point, it could be doing more harm than good.

If your toddler had his way, he might prefer to walk into kindergarten with a bottle hanging out of his mouth. Unfortunately, experts say this habit should be kicked long before kids are even close to being ready for school: The American Academy of Pediatrics recommends weaning before 18 months of age so your child doesn't develop any of the complications associated with prolonged bottle use, such as tooth decay. One of the most common unintended consequences of longterm bottle feeding, early childhood caries (sometimes called baby bottle tooth decay or nursing caries) are a "big concern," according to the American Academy of Pediatric Dentistry, particularly when little ones fall asleep with a bottle at night. (This isn't a problem unique to babies who bottle feed, however; breastfed babies can develop the same problems.)

Another problem with not switching to sippy cups early enough is that bottle drinkers often drink more milk than they need (up to 32 ounces a day), pediatrician Suzanne Corrigan, M.D., told Parents. While milk is nutritious, toddlers only need two to three servings of dairy per day (which works out to 16 to 24 ounces of milk). Filling up on milk means not having enough room for other foods with essential nutrients your kid needs, such as iron.

The AAP suggests starting to wean by switching your baby's midday bottle for a sippy cup before eventually cutting out morning and evening bottles. Expect a battle over that nighttime bottle, but don't worry about your kid starving before the sun comes up (by the age of 1, he shouldn't require anything to eat or drink overnight).

There's no reason you have to wait until your baby's first birthday, though. One study in the journal Pediatrics found that 9 months may be the ideal age to wean babies from the bottle, as CNN reported. Researchers found that parents who followed a "one-week plan" to switch their baby to a cup at 9 months were 60 percent less likely to have a toddler who was still using bottles, and weaning was easier for them than it was was for parents who tried a few months later.

"Parents who waited until after age 1 to wean their baby off the bottle seemed to have a more difficult time," study coauthor Jonathon Maguire, M.D., a pediatrician at St. Michael's Hospital in Toronto, said.

So how do you know when your little one is really ready? Most babies can try a cup at 6 months, according to The University of California San Francisco's Benioff Children's Hospital, and are generally ready to start weaning when they can sit up, eat from a spoon, show interest in solid foods and have an "established routine" for meals. Between the ages of 8 and 10 months, try substituting a sippy cup for a bottle at one feeding (choose a "snack" time when your child typicall drinks a little bit of milk instead of a "meal"); after a week, make the switch at another feeding. Follow this pattern gradually until there are no bottle feedings left, saving bedtime for last.

Will any of this be as easy as it sounds? Doubtful. But the good news is, this transitional phase won't last forever (even if it feels that way!).