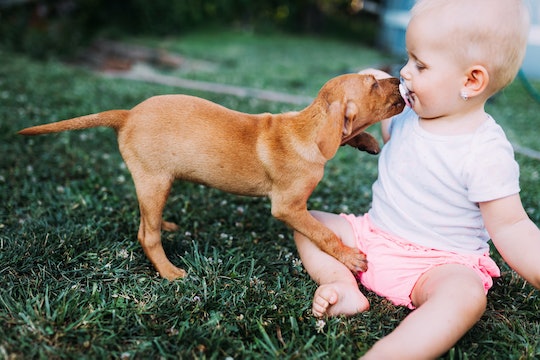 Here's What Happens When Dogs Meet Babies For The First Time

To say that I'm a dog person is putting it mildly. I believe they make life infinitely better just by existing in your presence. As I write this, my 15-pound mop of fluff, Montana, is sitting on my legs making them go numb, and I'm not moving her. Which means I've definitely wondered what my dogs are thinking, especially when I started having kids. I mean, when dogs meet babies for the first time, what happens to their brain? Obviously when you're pregnant and have a beloved family dog, this is something you ponder. You want them to be BFFs, but what's really going on in there?

When your dog is chasing their own tail or humping furniture, you may wonder if they're capable of any thought at all. However, dogs are more complex creatures than many of us would assume. A study out of Emory University scanned the brains of dogs using a magnetic resonance image machine (MRI) and evaluated the activity based on stimulus and reactions. While the study didn't find that they're likely to go all Animal Farm on their owners any time soon, it did show that there is depth behind their reactions. The lead researcher, Dr. Gregory Burns, is quoted in TIME as saying about their thoughts that “no one can know with certainty. But I think our dogs are experiencing things very much the way we do.”

When I had my first baby, I had a very loving and very dumb Rottweiler and an equally loving but incredibly bright Akita. While I didn't worry too much about how they'd react to my baby — they'd been around babies all their lives — I did worry about what the change in our home would do. Would they take one look at the baby, give it a whiff, and realize, "Oh crap, this one's permanent?" Would they distrust the new bald puppy that couldn't bark properly? More importantly, would my rottie whine all night when the baby cried like he did when ambulances went by?

Thankfully, my dogs were more amazing than I could have ever hoped, and my babies benefitted greatly from their presence. They had the perfect companions for nap time, playtime, and especially meal time. (No one is happier than a dog sitting under a high chair, believe you me.) I know this isn't everyone's experience, though. Some older dogs, dogs who haven't had exposure to babies, or dogs with difficult temperaments may not fare as well or be as well-behaved.

To determine how exactly my pups were feeling when they meant their human siblings, I contacted my local ASPCA (yes, those of the soul-searing Sarah McLachlan adoption videos) to ask them. I chose the ASPCA, not only because that's where I got my hava-shu mop puppy, but also because they often have to re-home dogs that have been surrendered because they didn't interact well with the babies in the home.

I spoke with Christina Lee, MA, CPDT-KA, Animal Behavior Specialist for the ASPCA, and she tells Romper, "When a dog first meets a baby — be it a family member or another family’s baby — he/she is taking in and being exposed to a lot of different sights and smells. A dog’s reaction may differ depending on whether a dog has been introduced to babies before." I was really lucky in this area. My husband was trained to train canines for service on the police force, and he was keen to expose our dogs to babies from the time they were puppies. This isn't possible if you've adopted an older dog.

"They may curiously sniff the baby and try to gather as much information through their nose as possible," Lee adds. "They may keep their distance if they think that the baby is something strange and they are unsure of it." I've seen more than a few dogs at the park look at a stroller like it contains a bomb. "They may ignore the baby and only pay attention to their owner or other things in the environment — this could be the dog’s way of dealing with stress by purposefully distracting him/herself, or he/she could just not have that much interest!"

How you make the transition to a family of three (or four or more) may make all the difference. Lee says, "I think the most important thing pet owners can do is to help prepare the dog for the baby. As soon as you know that mom is expecting, start buckling down on training with the dog! Make sure his basic commands (such as sit, down, stay, come, and leave it) are solid, and up the ante." She stresses that you must have a command in place for when you're holding your baby as well. "A lot of people don’t realize that their body will be different when holding a baby. Not only does this help the dog get used to the change in the human’s body language, it also helps the human get used to holding a baby and working with the dog."

Then, there's the meeting. Lee suggests that "when baby is ready to come home, have a friend or family member hold the baby outside while the new parents greet the dog in the house (or wherever the dog is staying). Both the dog and the parents may not have seen each other in a few days so the dog will be super happy and excited to be reunited!" It's sort of like that time my mom brought home my brother and told me I was still just as important. (Though I would've preferred a puppy.) "Let the dog get out his yayas without baby, and once he’s a bit more relaxed, bring the baby inside. Once the baby is settled in at home, it’s important to ensure that the dog’s routine is kept consistent. Make sure he/she gets the same amount of physical and mental exercise he/she was getting before," Lee says.

It's going to be a challenge, but hopefully, your dog will know he or she is still aces and they'll fall in love with your baby. I know mine did. But don't ask what your cat is thinking, because we all know they don't give a crap.