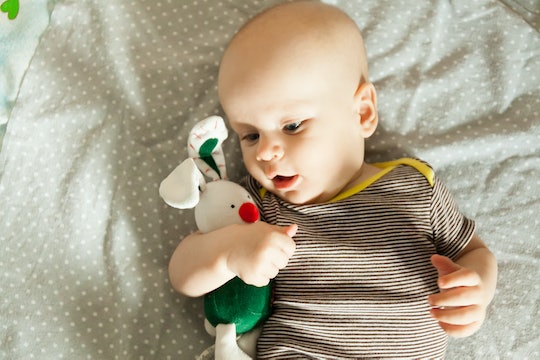 Here's When & How You Should Phase Out Your Child's Lovey

My daughter's lovey was a ratty green blanket. She carried with her everywhere, refused to sleep without it, and eventually grew so attached to it that I bought a spare in case the worst of the worse happened. My son loved his bottle so much that he hugged one when he slept until his second birthday. I really didn't mind, since having a lovey seemed to make my babies happy and meant that I got a break once in a while, but I often wondered, sometimes out loud, "When and how do you phase out the lovey?"

It turns out, experts agree that a lovey is actually something you might want to encourage your child to use, rather than discourage. And you definitely shouldn't try to take it away before your child is ready. According to the American Academy of Pediatrics' (AAP) website Healthychildren.org, a lovey can be an important source of emotional support for your child, and, as a result, help them feel secure as they transition to independence. According to What to Expect, parents should encourage their child to have a lovey, but limit it's use to certain places to help avoid losing it. BabyCenter adds that limiting use to stressful times or transitions, like bedtime or car trips, can reduce your child's dependence on it. Eventually, though, most kids will give their lovey up on their own, due to social pressure or not needing it anymore, without any help from you.

According to the AAP website healthychildren.org, parents shouldn't discourage their child from having a lovey. In fact, you might find that having one can make your life easier by helping your child sleep, comforting them when they are upset, and reassuring them when they are separated from you or in a new place. You can introduce an item, or your child may pick something random. This might be a blanket, a soft toy, or even something weird like a burp cloth, bottle, or cup.

According to the same website, "these special comforts are called transitional objects, because they help children make the emotional transition from dependence to independence." In other words, when your child is going through a stressful time, having a lovey can be a big help. As child psychologist Ruben Gonzalez, MD tells Parents.com, "holding onto something soft, warm, and secure helps a child cope when mom and dad aren't around."

So, when should you phase out your child's lovey, and how the heck do you do it? According to What to Expect, there's no right time to phase out a lovey, and you shouldn't pressure your child to give it up before they are ready. However, you may decide to limit its use to certain places, if only to help avoid losing it altogether (which can be a nightmare for both your child and you) your child may learn to rely on it less and less. BabyCenter adds that if you limit its use to situations when they really seem to need it — like bedtime or car rides — you can reduce your child's dependence on a lovey, and encourage them to try doing things on their own.

Experts agree that, eventually, most kids will give their lovey up on their own, without any intervention from a parent or guardian, due to social pressure from their peers or simply not needing it to cope with stress anymore. BabyCenter explains that a child's need for a lovey will peak between 18 to 24 months, and then start to fade away. According to Parents.com, a child will generally stop needing a lovey when they're between 3 to 5 years of age, or when they start to notice other children don't have one. Chances are, your child will begin to need their lovey less and less as they become more comfortable with social situations. Parents shouldn't be surprised or concerned, though, if their child continues to re-visit their transitional object during times of change.

One exception to might be if your child's lovey is a pacifier. According to Parents.com, pediatric dentists recommend limiting pacifier use starting at age 2 ,and phasing them out entirely by age 4, as continued use can cause problems with their smile and their speech. Fortunately, according to the same site, most kids are able to give up their pacifier by that age, and with a little encouragement from their parents.

The bottom line seems to be that unless you want to add yet another thing to your parenting to-do list, it's OK to simply let your child have their lovey until they decide otherwise.