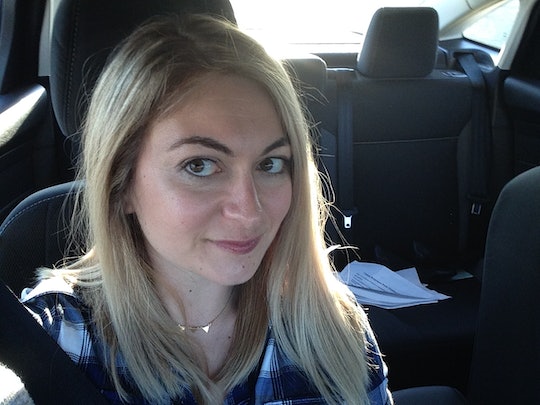 When I Found Out I Couldn't Get Pregnant, I Stopped Feeling Like A "Real" Woman

Since I got my period for the first time when I was 12 years old and started taking birth control pills when I was 16, I never thought twice about whether or not I could have kids: after all, my periods were regular, so it never occurred to me that something might be wrong with me. Nor did I ever conflate my fertility with my feelings about my own femininity: I knew I identified as a woman and I felt like I had a woman's body, so I never thought about my gender identity beyond that fact.

But the moment I found out I I couldn't get pregnant naturally, everything I thought I knew about being a "real" woman changed.

When I was 27, my husband and I started trying to get pregnant. I took pregnancy test after pregnancy test, all of which were negative. So I made an appointment with my doctor to find out what was going on.

Instead of learning that I was expecting, I learned that I had premature ovarian failure, which means my body went into menopause long before I'd tried to get pregnant. While most women my age still had hundreds of eggs left, I had less than 10 and they weren't of the best quality. Taking birth control had created the illusion that I had a regular menstrual cycle, but once I'd stopped taking the pill to try and get pregnant, my period stopped completely.

When I asked my doctor what my chances were of getting pregnant naturally, he said it was practically impossible. Put it this way: if my fertility issues were a scene from a space movie, it wouldn't be like the scene where a hose breaks, but you know someone's going to throw on a spacesuit and fix it. It'd be more like the scene toward the end, where there's clearly been a total system failure so you probably shouldn't get popcorn now.

Hearing the doctor's diagnosis was obviously devastating, but not just because it meant that my body couldn't give me the family that I'd always envisioned in my future. Rationally, I knew adoption was a path to parenthood that was still available to me, as were assisted reproductive technologies like in-vitro fertilization (IVF). But thanks to the messages I received from society about what it means to be a woman, finding out that my reproductive system didn't function challenged the way I defined myself.

Intellectually, I know that this is wrong. Not all women get periods, whether they are transgender or have a medical issue like I do, and of course your ability to menstruate or conceive a child has no bearing on your gender identity. But it's hard not to feel that way when our culture tends to equate having a working reproductive system with femininity.

All of a sudden, I started feeling like a broken woman, like there was something irreparably wrong with me. I had always hated getting my period, but once I no longer started getting it, I quickly found myself feeling like an outsider among my friends, who all talked about their periods a lot. It was an odd feeling to stand in a circle of my girlfriends, listening to them talk about how they all have PMS and not knowing what to say that wasn't bitter ("Well, at least you can get pregnant") or fake-sounding ("I'm sorry your amazing biological process is making you crampy. Do you want a Snickers?")

Even tampon commercials, which feature women doing all sorts of extreme activities while menstruating, made me feel weird about my status as a non-menstruating woman. Although tampon ads deliver a powerful message for the average woman or young girl — that you don't have to stop kicking ass at life when you have your period — they were confusing for me. Am I less powerful than most women, because I don't bleed as they do?

Am I less powerful than most women, because I don't bleed as they do?

I struggled with the same feelings of inadequacy when I listened to women discuss trying to get pregnant. When I heard women discuss things like trying to aim for a spring due date to avoid being heavily pregnant during the summer, I couldn't help but think that was a luxury I couldn't afford. When you're trying to conceive, and you're working around your doctor's office hours and his schedule, you don't get to think about things like how nice it would be to give your baby a summer birthday, just so they can have pool parties growing up.

Still, I know I'm speaking from a position of relative privilege. I'm very fortunate that I had both the financial means and the right biological makeup to allow a pregnancy via IVF to even be an option for me, as many low-income couples who want to be parents don't have those options available. I'm also lucky that IVF worked: Through a combination of scientific technology, a mountain of money, lots of needles and pure luck, I managed to get pregnant with twin boys.

Still, women who can just lay down, have sex and get pregnant are a bit like unicorns to me now, to the point that I'm surprised all women who can conceive naturally don't go strutting around like Beyonce at all times, just because they can make babies if they want to. I completely respect a woman's right to decide that having kids isn't something she wants to do, but what these women's bodies can do is just so amazing. I never fully appreciated it until I realized that I didn't share that ability.

Being able to carry my own children went a long way towards helping me process some of my feelings of inadequacy over not being able to conceive naturally, and I'm grateful to have had the chance to experience pregnancy. But as I head into my 30s, I'm becoming hyper-aware of society's emphasis on women my age to become mothers, regardless of whether they want to (or are able to).

The rational part of me knows that I don't have to have working ovaries or get a period to be a "real" woman. But sometimes I worry that my inability to get pregnant "naturally" will always make me feel like a part of me is missing — just like my eggs that were dead and gone before I even knew it.