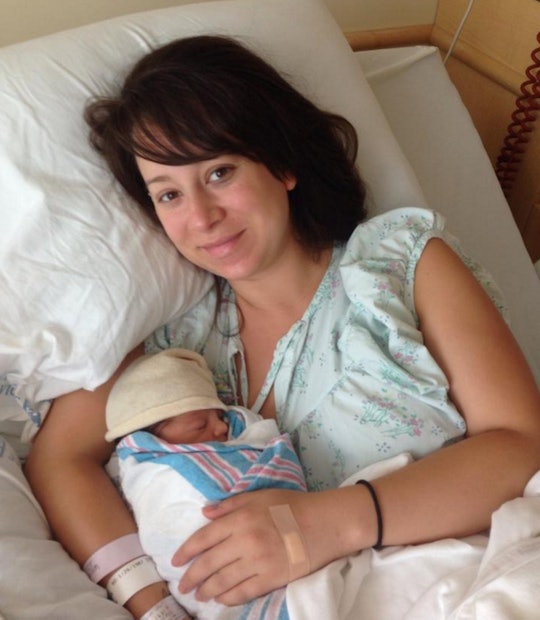 When I Held My Son After He Was Born, It Wasn't Love At First Sight

From the moment you announce your pregnancy, seasoned mothers attempt to prepare you for the moment you hold your child in your arms. Nostalgic parents describe all the ways in their worlds shifted and their lives changed and they were instantly in love. Expectant women due before you will tell you that the first moment you see your child erases the hours of labor and delivery. They all promise that the pregnancy pains, the sleepless nights, the weight gain, the constant discomfort, and the sleepless nights are worth it for that first, initial meeting.

And it’s something I didn’t experience.

When I held my son for the first time, I felt more relieved than in love. My partner and I had experienced a difficult 40 weeks, including a high-risk twin pregnancy, a down syndrome scare that was only elevated by an invasive (and painful) procedure, two pre-term labor scares, a twin loss that was as devastating as it was shocking, a blood infection that left me in the hospital for a week, and countless tests and appointments and screenings. I spent the majority of my pregnancy either living out the worst-case scenario, or preparing for the worst-case scenario to arrive. So when my son was finally born and he cried when he was supposed to, I felt the weight of another possible heartbreak lift from my shoulders.

When I held him for the first time, I felt more terrified than in love. His ineffectual hands gripped my exposed skin before he even opened his eyes, and I become acutely aware of how much he naturally needed me. Before he saw me, he reached out for me, and I knew I’d forever be at the mercy of his needs. I couldn’t call out when he cried for me, and I couldn’t say I was too busy when he needed me. The overwhelming knowledge that I was responsible for his safety and health and happiness was enough to make me ask if the doctor could put him back. Just until I felt ready.

When doctors put my son in my arms, I felt more exhausted than in love. It had been nine months of feeling like a stranger in a body I didn’t know, understand or recognize. It had been countless nights spent tossing and turning to either side, unable to sleep on a belly constantly punched and kicked. It had been over 20 hours of labor, three hours of active pushing, and the looming threat of an emergency cesarean. When his tiny body finally hit my chest and I could put my head back in successful relief, I let out every body ache and exhausted nerve with a single sigh. I wanted to sleep for a week. I wanted to revive the parts of myself I didn’t know I had to use. But he needed to be breastfed immediately, and I couldn’t help but oblige. The exhaustion continued, one bloodshot moment at a time.

I felt more uncomfortable than in love. Insecurity and self doubt took over, and I wasn’t sure I was the best woman to be holding this tiny life, so raw and exposed and fragile. I didn’t know if I was able to be everything he needed, didn’t know if I could give him everything he deserved, wasn’t sure I could do what every other woman seemed to know to do so instinctively. I didn’t feel like a mother; I felt like a child who was given a doll she wasn’t sure what to do with. I didn’t trust or believe in myself, and I was so afraid that I’d fail.

Many of those feelings refused to leave me. It was difficult for me to not spend my son’s first nights at home staring at him, foregoing sleep for fear his chest would stop rising. I knew what it was like to experience the worst case-scenario, and it was hard for me to let go of that, even if my baby was here, and safe. I was terrified of my endless obligations and exhausted because of them, always asking for advice but simultaneously afraid to let anyone take care of him but me. When I fed or rocked or changed him, I felt uncomfortable. Was I doing it right? Was I doing it wrong? Was I even a good mom?

Months went by and my son continued to grow and still, I didn’t feel that overwhelming feeling of all-encompassing motherhood so many women describe. I felt broken and alone, completely convinced I was the only woman who didn’t experience that world-shifting moment so many others told me about.

And then I had my first child-less outing. I left my son to meet a friend and was away for a couple of hours. As I walked back through the door and saw my son’s reaction, a wave of warmth and fullness overcame me. I wanted to cry. I’d missed his face and I wanted to hold him because the weight of his body seemed like the only thing that could keep my chest from exploding. I kissed the top of his head and whispered that I loved him and finally, after months of feeling like I was defective, I felt like I was really, truly, a mother.

It wasn’t love at first sight, but it was so much more.

More Like This
40 First Mother’s Day Instagram Captions
Celebrating Your First Mother's Day? These Quotes Say It All
Here’s What You Need To Know About That Viral 1960s Baby Formula “Recipe”
Gerber's New Spokesbaby Isa Has The Biggest Brown Eyes & Was Born With A Limb Difference