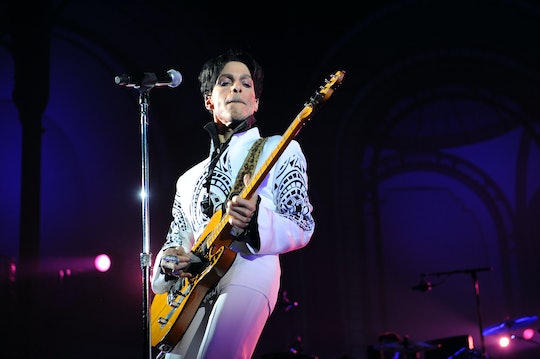 When I Listened To Prince, I Learned How To Be Myself

When I was 16, Notorious B.I.G was shot dead in LA. It was as if an older cousin of mine had died, but I felt ashamed to let anyone see me cry. I wept silently, wiping my eyes while sitting in the passenger seat of my mother’s black Nissan Altima. I was in Miami in June, 2009 after Michael Jackson died. We were in a club, I was drunk, and they kept playing his songs over and over. The emotional impact of hearing my entire childhood on repeat, knowing the man who created those songs no longer occupied the same earth as I did, was overwhelming. I ran to the bathroom, not wanting to be the drunk crying girl in the club, locked myself in a stall and called my fiancé, crying to him about how stupid I felt at being so upset.

Both of those deaths crushed me, made me feel like I’d lost a family member, but I was too ashamed to show it. Today, I’m struck again with that same feeling of extreme personal loss as I mourn Prince’s death at 57, a man who, like Michael Jackson, formed the soundtrack of my childhood, but who I continued to listen to, admire, and analyze well into adulthood. It has been a long time since I wept over the death of someone I did not know personally. But then again, what is the most intimate aspect of a human being if it is not the art that he or she creates?

Prince’s sound involved placing the electric guitar in the forefront of his melody, highlighting the instrument the way funk or R&B would highlight a baseline. I imagine his intention was to electrify his music, combine the soul of funk and the energy of rock. But what it did for me, was open my mind.

As a kid, it was easy to love to Prince. He was gorgeous and made music I could sing and dance to. During his most prolific period, in my opinion, his time with The Revolution, I was between the ages of 4 and 7, and truly had no idea what “Little Red Corvette” alluded to, I just knew I liked the song, and I enjoyed singing it. My fandom was reborn in the early to mid-’90s when Prince took on the moniker of the Artist. At night, I remember listening to the Quiet Storm or punching his compact disc into my portable CD player and singing along to Diamonds and Pearls, or Nothing Compares 2 U.

Most people talk about his incorporation of several musical genres into one unique sound as his defining musical quality. The makeup of that sound is comprised of soul, gospel, R&B, funk, and rock. I grew up listening to all these forms of music in great quantities, except rock and roll. Prince’s sound involved placing the electric guitar in the forefront of his melody, highlighting the instrument the way funk or R&B would highlight a baseline. I imagine his intention was to electrify his music, combine the soul of funk and the energy of rock. But what it did for me, was open my mind.

I felt less ashamed and nervous to then take the leap and listen to more rock music with Prince as my guide. It was the early ‘90s, and we were heady in the days of Grunge. Prince was like a gateway drug for me, giving me urge to try out heavier music through bands like Nirvana and Smashing Pumpkins, whose sound, especially the orchestra laden Tonight, could’ve easily fit in between Purple Rain and Darling Nikki inside my Prince mix-tape.

Just as Sly Stone and Jimi Hendrix were so flawlessly ingrained in Prince’s sound, so now was Prince in the sound of contemporary music. You can hear his influence in Alabama Shakes, Rihanna, Lord, Sia, Lenny Kravitz, and many others. You can hear him everywhere.

As an adult, my admiration for Prince and his music shifted. I no longer listened to Prince just to sing and dance along with his songs. Nor did I listen to him as a way to seek permission to explore other music, other entertainment, other ways of thinking. I listened to him as an expression of my inner self. The combination of sound and genres he used created layers that I could relate to. I listened over and over to discover those layers, and in the process I connected what I heard to other music, visual imagery, and ways of thinking, discovering the layers of my own personality. I learned who I was through the chords of Prince's melodies.

I thought about his music and had deep discussions with my husband and friends about it. I considered his influence on the rest of popular music and culture academically, realizing that, just as Sly Stone and Jimi Hendrix were so flawlessly ingrained in Prince’s sound, so now was Prince in the sound of contemporary music. You can hear his influence in Alabama Shakes, Rihanna, Lord, Sia, Lenny Kravitz, and many others. You can hear him everywhere.

His lyrics, literary and poetic, now required study. I’ve listened to "Little Red Corvette" many times as an adult. On a drive between Maryland and my hometown in Virginia, I was listening to the song again. This time, I didn’t sing along. I didn’t dance. And I heard the real story. Not only does it tell the story of sexually promiscuous woman, it also tells the story of a woman who was sexually promiscuous because of her past, because of the hurt she endured “by the jockeys who were there before me.” Music critics often spoke about how sexually explicit his songs were, but they reflected a certain reality and nuance that most of those critics failed to capture with a mere surface layer listening. Prince spoke the truth because he lived it. His lyrics require the same attention someone would bring to any poetic text. And, from what I know of the man, from the genius in his works, his art, a mere surface layer listening is not at all what he intended.

It is silent in my home right now. After all, music begins within the void of silence. Tonight, when I get home, I am eager to turn up the sound of Prince’s music and let it fill this room. I think now that the sound of silence, pregnant with longing for music, love, touch, sex, and energy is what Prince meant by “when dove’s cry.” But unlike Biggie’s death, and unlike Michael’s death, I am not ashamed to let the world know my grief and that I cry for this man like I saw his face every day. His art let me know him. And through that art, I got to know myself. And doesn’t a man like that deserve my tears?