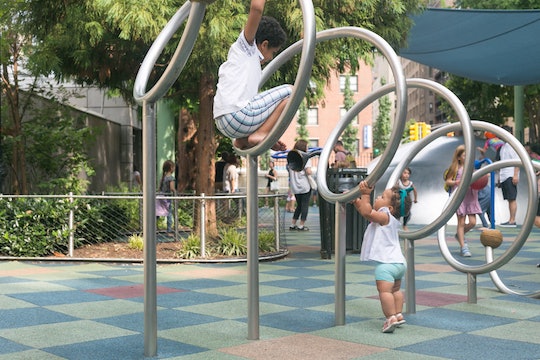 I’ve never really been the mom who has monumental “a-ha” moments. I'm more the mom having the “oh crap” moments followed by a very belated "oh riiiiiight." And like so many moms reading this right now, I tend to go to sleep at night harboring volumes of mom guilt, thinking about what I could have done differently during the day. A few months ago, though, something changed. I would be lying if I said that it helped erase my sleepless nights (because motherhood) but it’s done a world of good for my mom guilt and getting through each day. To get there I had to understand, truly, that my son's behavior wasn't my fault.

A few months ago, I moved to the suburbs with our kids, away from the New York City life they had grown accustomed to. My husband was going away for an army training, our lease was up in the city, so we decided that it would be best to crash at my parents for six months and then move again whenever my husband returned. I know, I know, lots of moving around, but in my defense, our son had been begging to leave the city and was so excited about our adventure. And our daughter was too young to really know what was going on.

Our now 10-year-old son has always has some minor behavioral problems, which we thought would get better once we moved. Maybe we overlooked a lot of it, but things got worse (because nothing ever goes as planned in parenthood). So we’ve been scrambling to figure out what was going on inside that head of his.

I found myself taking deep breaths and thinking to myself that this behavior was never taught or modeled at home.

It almost seemed like I was getting phone calls from school each day and each time I would hang up the phone feeling pretty appalled by his behavior. Don’t get me wrong, he has his incredibly sweet, endearing side, and his teachers always made sure they pointed that out. But whenever he couldn’t focus, didn’t want to do something he needed to do or encountered a rule he didn’t like, all hell would break loose.

At least 10 times a day I found myself taking deep breaths and thinking to myself that this behavior was never taught or modeled at home, so where was he learning it? I asked myself so many “whys” every single day.

He started therapy outside of school and is taking part in a 60 day in-school evaluation to put together a better plan for getting through these rough moments. And of course, like all parents do, I started consulting Dr. Google and read everything I could get my hands on about special needs children, anxiety, behavioral issues — I read it all.

Then one day I came across an article one day that was titled something along the lines of “what I want the world to know about being the parent of a child with ADHD.” I read and read and could relate to everything that this woman listed. She described how hard it was to go places in public because she never knew when there would be an outburst. Check, I thought. Then went into how sometimes he would get so angry that it would fill him with rage. Check again. Then the last thing she listed was how she wanted other parents to understand that her son’s bad behavior wasn’t a reflection of her parenting. Aha. Wow. Holy Crap.

I had spent so much time blaming myself for the way that he had been acting, as if I wasn’t raising him right, that I never stopped to think that it actually had nothing to do with me.

I think that I had been so consumed with going through the motions of understanding that our son has some special needs that I hadn’t stopped for a second to reflect on how it was all making me feel. Like crap, if I was being honest.

I tussled with so many emotions inside of me about how he can’t control his emotions, work through issues without screaming, saying really hurtful things, completely ignoring that there was a thing called manners, the list goes on and on. I had spent so much time blaming myself for the way that he had been acting, as if I wasn’t raising him right, that I never stopped to think that it actually had nothing to do with me. But how could I not think this way? Whenever parents see a child acting out in public, the first thing they do is blame the parents for the child’s behavior. And it’s awful.

But it wasn’t my fault. Our son is growing up in a compassionate home where manners have been taught since he was a toddler and quite frankly, I don’t need to defend myself or my parenting. I know in my heart how hard my husband and I work everyday to make sure we’re raising good humans.

I know that there are still so many challenging days ahead, but having that moment of relief when I know there was another mom out there feeling the same way I was and saying “it’s okay” made me feel a million times better about facing them all. And we’re doing everything that we can to help our son cope and learn to work through these issues, make a plan that truly impacts his everyday life and help him be as successful as possible.

Will I ever stop trying to figure out ways to control his outbursts? Remind him to always use his manners? To respect everyone around him? Nope. Never. But if he forgets to do those things, I know it’s not because of me. He’s struggling with some deeper issues that we’re working to resolve. We take it one day at a time in our home and that’s all we can do.