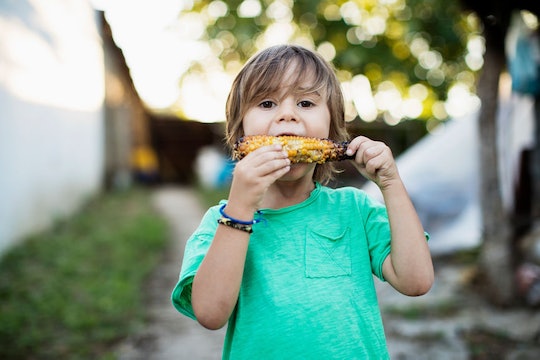 Luckily, The 4th Of July Falls On A Very Practical Day This Year

As the summer rolls along, Americans can look forward to the classic holiday celebrating the red, white, and blue. So when exactly is the Fourth of July weekend in 2019? The holiday will create a pretty long weekend this year, which is great news for the backyard grill and fireworks fans all over the United States. You can almost taste the BBQ already.

For 2019, the Fourth of July holiday itself falls on a Thursday, so the Fourth of July weekend festivities can take place from Friday, July 5 through Sunday, July 7, according to the USA federal holidays calendar. Basically, it's the setup for four straight days of patriotic partying, so stock on on those charcoals and sparklers now.

Wherever you live in the USA, there's likely an event celebrating America's Independence Day going on nearby. In NYC, the Macy's Fourth of July fireworks display will dazzle onlookers gathered from all over the city with loads of explosives and music events. In Los Angeles, there's the Grand Park + The Music Center Fourth of July Block Party, featuring picnicking, music acts, and of course a big fireworks show. Meanwhile, Chicago hosts a fireworks at Navy Pier display that tends to draw major crowds. And plenty of other cities and small towns all over the country host similar outdoor bashes. Wherever you live in the country, chances are there's some kind of celebration with fireworks, food, and music nearby. Keep an eye out for these fun (and often free) events in your local community.

Of course, people in the USA are pretty great at throwing their own parties as well, and the traditional Fourth of July backyard barbecue bash is no exception. Hot dogs, hamburgers, and whatever else fits on the grill will get fired up all over the US that weekend. To liven up your own party, consider the easy Fourth of July recipes that come in red, white, and blue shades, courtesy of Bustle. That flag cake with blueberries and strawberries is a super tasty edition to any backyard party.

For parents, the Fourth of July can be a somewhat tricky holiday, thanks to all the explosives involved. Sure, sparklers and bottle rockets are hella fun, but you also want to keep the kids safe during these festivities. For the younger set, or those who don't like loud noises, there are plenty of kid-friendly Fourth of July activities that don't involve any fireworks, according to Romper. And if you do want to light up the night sky with the kiddos, then just keep the super basic firework safety rules in mind, also explained in Romper. A few ground rules can make sure your backyard bottle rockets don't turn into tiny weapons.

So go ahead and start making your plans for this awesome summer holiday now. Whether you go out to a huge bash with a professional fireworks display or hang out at home eating popsicles with the kids, there are so many ways to enjoy the Fourth of July weekend with your friends and family.