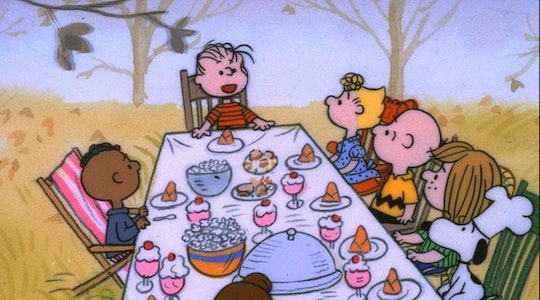 Here's When 'A Charlie Brown Thanksgiving' Will Be Back On TV

A Charlie Brown Thanksgiving first aired in the 70s, which predates the existence of millennial parents. But for years the Peanuts gang have made themselves nice and cozy inside family homes, especially around the holidays. This year, A Charlie Brown Thanksgiving will return to television just in time for freshly baked pumpkin pie. (Though, in the spirit of Ina Garten, store bought is fine, too.)

Charlie Brown, Snoopy, Lucy, Linus, Patty, and the rest of the Peanuts gang have become a true holiday season staple. There seems to be a Charlie Brown special for every occasion, from Halloween and Christmas to, of course, Thanksgiving. As it has in previous years, the A Charlie Brown Thanksgiving special will air on Thanksgiving Eve, Nov. 27, at 8p.m. ET.

In the cartoon special, Charlie Brown and the gang get up to their usual heartfelt misadventures — this time involving a Thanksgiving feast gone wrong. Ever the well-intentioned friend, Charlie Brown, arranges a special meal for his friends to share, according to ABC, but ends up rather disappointed when Snoopy and Woodstock (the chosen caterers) prepare toast and popcorn instead of the traditional turkey and sides.

While the old-school comic may not be as be as enthralling to young viewers as the latest YouTube Kids toy unboxing video (seriously, how did that even become a thing?), the simple message of friendship and optimism is definitely a touching way to help kick off the holiday season. Plus, it's a great way to get the whole family snuggled up in front of the television for a nice little bonding session before bed.

Given that there are actually a whopping 45 Charlie Brown holiday specials, according to Vulture, chances are that there is at least one special Peanuts moment that sticks out in your memory. But it also lands smack-dab in a number of Charlie Brown TV specials that grace the airwaves at this time of year.

Of course, perhaps the biggest Charlie Brown television moment of the year will come next month, however, when ABC airs the 1965 classic, A Charlie Brown Christmas (appropriately rated number one on Vulture's ranking of Peanuts specials). From Charlie Brown's diminutive Christmas tree, to Linus' sweet speech about the meaning of the holiday, it's no surprise that it still holds its own among viewers of all ages every holiday season.

But if it's been a while since you've last watched a Charlie Brown special and are wondering how the content has aged in terms of being appropriate for children's consumption, then you're in luck — A Charlie Brown Thanksgiving has a five-star rating on Common Sense Media, and a recommended viewing age of 4+. The only pitfall might be the repeated use of words like "stupid" and "blockhead," but hey, for a cartoon that came out more than four decades ago, that isn't all that bad.

While it's true that the annual onslaught of Christmas-theme kids movies might overshadow this Thanksgiving special, there's something particularly lovely about sitting down to watch the nostalgic cartoon before the big meal, and remembering why Charlie Brown and friends still capture our hearts. And, well, let's be honest: what tired parent is ever not down for a quiet movie night with the little ones — especially when they need to be up early to pop a turkey in the oven.