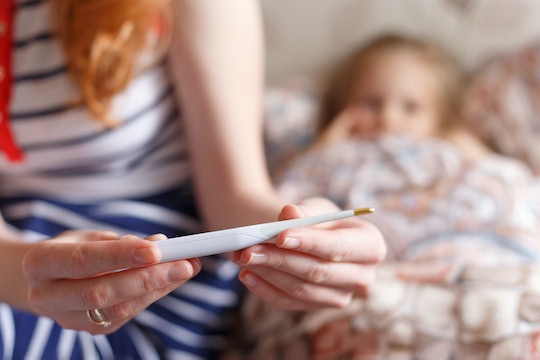 Here's When Your Child's Fever Could Be Dangerous

Fevers are one of those seemingly small things that absolutely terrify parents. And, as a new parent, it's difficult to determine what's "normal" and what warrants a trip to the emergency room. So if you're asking yourself the often overwhelming question, "When is a child's fever dangerous?" please know that you're not alone. Thankfully, experts have established a threshold that separates the typical from the potentially dangerous.

Because babies can't articulate or indicate what hurts where, it's vital for parents to look for signs and symptoms that might accompany a fever. For example, according to BabyCenter, if your baby has difficulty breathing, has an unexplained rash, is noticeably pale or flushed, has fewer wet diapers, and is lethargic, it's best to call your doctor and/or nurse's line immediately. You should especially call the doctor if a rash appears dark and almost bruise-like, as it can be a sign of a possible infection that would require medical attention. It's also worrisome if your baby seems to be in pain or can't move specific body parts (like their neck, for instance), and if so you should call the office immediately. And if your child already has a weakened immune system, you should call the doctor as soon as they spike a fever for whatever reason. As the old adage goes, it's better to be safe than sorry, and children with immune system issues often need special treatments.

If your child is 1 to 2 years old and has a high fever lasting more than 24 hours you should call their doctor, according to WebMD. And if the child is any age with a temperature of 104 F or higher, it's also time to call the doctor. But again, how your child reacts to their fever — severe diarrhea, vomiting, a fever — is just as important as the fever itself.

There are also a number of myths surrounding high fevers and children, most notably the myth that a fever can cause brain damage. But according to the Seattle Children's Hospital, a child suffering from a fever and an infection likely won't have brain damage. If a fever reaches 108° F (42° C) or above, however, that's cause for concern and can negatively impact multiple aspects of the body, including the brain. Spiking a fever that high is extremely rare, though, and typically occurs when a child is trapped inside a hot car with the doors and windows shut.

You should also know that seizures occurring as the result of high fevers only happen to about four percent of children. According to Dr. Sears, if a fever is high parents should be on the lookout for signs of meningitis and, of course, call a pediatrician and/or seek immediate care if meningitis symptoms are present. For example, if your child is also suffering from a stiff neck or neck pain, a headache that makes looking at lights painful, and nausea and/or vomiting, it's time to call a doctor or take them to a local emergency room.

Despite how scary it can be to see your child sick and/or running a fever that definitely looks uncomfortable, for the most part a fever isn't dangerous. But, as always, if you suspect something's not quite right, it doesn't hurt to call your health care provider and ask questions. You know your child better than anyone else, and that is exactly what their doctor is there for.