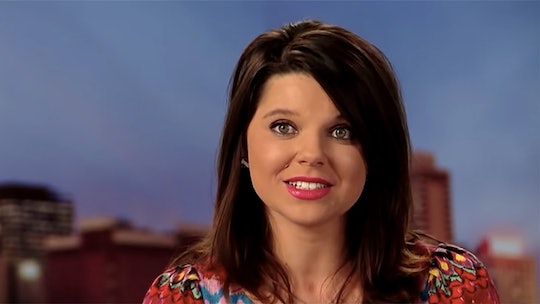 Counting On fans were probably pretty overwhelmed (but in a good way) when a handful of Duggars announced their pregnancy within a short time period. But as much as people might be excited about the baby boom, some folks are having trouble keeping track of the Duggar due dates. And plenty of fans have probably wondered: When is Amy Duggar due?

More Like This
The 21 Most Popular Baby Names In 2021 (So Far)
Can You Sunbathe During Pregnancy?
40 Baby Shower Messages To Write In A Card Or Gift For Baby
These Baby Names Are Perfect Alternatives To James

If you've followed the Duggars since their 19 Kids & Counting days, then you already know that Amy isn't Jim Bob and Michelle's child. That's because she's the daughter of Jim Bob's sister, Deanna. That being said, she goes by her mother's maiden name, which is why people often assume she's one of the 19 kids.

Now that you're caught up to speed on her background, here's the skinny on her latest life developments. After marrying Dillon King in 2015, Amy announced in April that she's expecting their first child, according to Us Weekly. “We are completely speechless, overly excited and ready for the next chapter as new parents!” the couple told People at the time.

Since then Amy, 32, has kept Instagram followers regularly updated on her pregnancy journey. And although she hasn't shared a specific due date with fans, it isn't too difficult to figure out roughly when baby King will make his big entrance. On May 16, for instance, Amy shared her first bump photo, writing, "I see you little bump!! 19 weeks today!!"

At the halfway point of her pregnancy, King marked the milestone with the help of Bon Jovi lyrics. The photo featured the mom-to-be standing next to a chalkboard that reads, "Oooohh we're halfway there." Amy captioned the Instagram post with, "20 weeks today!!! #octoberbaby Someone finish the song! ;)."

Not long after this update, Amy and Dillon revealed the sex of their baby, announcing that they're expecting a boy. "It's a boy! I’ve always wanted to be a boy mom! Dillon builds lifted trucks, so I can just imagine how suped-up the Power Wheels will be,” Amy told People. “We just can’t wait for this little ball of energy to arrive! He’s already named, so let all the embroidery begin. I am so obsessed with baby bath robes!”

Then, at 26 weeks along, Amy dished on her pregnancy cravings, writing on Instagram, "Ok I want like a garden salad with like good good ranch, and cucumbers, a slice of french toast with IHOP strawberry syrup, chocolate chex cereal with sliced banana, throw in some fettuccine alfredo, grapes and crunchy cheetos too!"

But back to the question at hand: When should fans expect the arrival of Amy's baby boy? Eagle-eyed Instagram followers might have noticed the #octoberbaby hashtag in her 20-week update. And if you do the math by counting the weeks up to 40, that puts Amy's due date sometime around Oct. 9.

But as you probably know, the odds of a baby actually being born on their due date are pretty slim. So, chances are, Amy will deliver slightly before or after Oct. 9. It's a pretty safe bet, though, that her baby boy will arrive in October. I think that's the perfect time to have a newborn, and I can't wait to see fall-themed photos of her little guy!