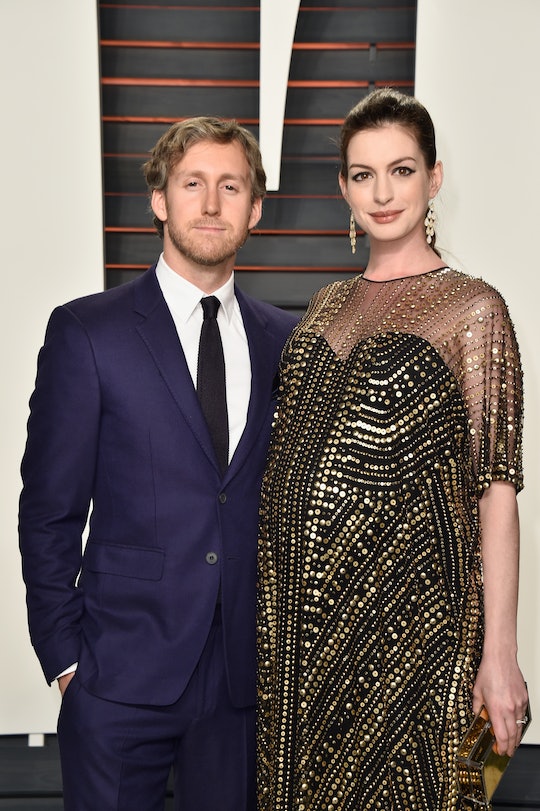 Anne Hathaway *Could* Be Welcoming Baby #2 Right Around The Holidays

Anne Hathaway fans have had a very exciting week. On Wednesday, (seemingly out of nowhere) the Academy Award winning actress announced on Instagram that she is pregnant with her second child — and that's it. So of course, everyone is dying to know more about her pregnancy. And people are already asking — when is Anne Hathaway due? Although the actress hasn't confirmed her due date, some things can be inferred by her announcement.

In spite of being a high profile actress, Hathaway is very secretive when it comes to talking about her personal life. And you can't blame her — there are some things meant to be kept private, and she chooses her personal life to be one of those things. But on Wednesday, Hathaway decided to let fans on that side of her life.

In a very simple Instagram post, Hathway revealed that she and her husband, Adam Shulman, are expecting their second child together. The couple is already parents to their 3-year-old son, Jonathan. "It's not for a movie...#2," Hathaway wrote in the caption of the photo of her bump.

In addition to posting the black and white shot of her bump, Hathaway had the sweetest message for her friends and fans struggling with infertility. "All kidding aside, for everyone going through infertility and conception hell, please know it was not a straight line to either of my pregnancies," she added. "Sending you extra love."

Now that the cat is out of the bag, people are likely wondering when they will get to meet Hathaway's newest addition — and here's what can be inferred.

Most expecting mothers wait three months (or until the 12 week mark) of their pregnancy to share the news with everyone (after they've shared the news with their immediate family), according to Parents. This is because some mothers are afraid of miscarrying (the risk reduces each week), and don't want to share this news too soon. So, some could assume that Hathway is currently at her 12 week mark.

If she is three months pregnant, then it is possible that she is due sometime in this winter, according to PopSugar. So, that can mean that she is due anywhere from November 2019 to January 2020. Five to six months isn't that long of a time to wait to meet her little one.

Fans can also look to the last time that Hathaway was pregnant in order to find out when she might be due. She first confirmed to E! News that she was pregnant with her first child in November 2015, and Hathaway was already reportedly in her second trimester at the time. Four months later, Hathaway gave birth to Jonathan on March 24, 2016, according to E! News.

If anyone were to base the second pregnancy off of her first pregnancy, then it can be inferred that she will give birth as soon as November. And that is beyond exciting.

As previously stated, Hathaway is pretty private when it comes to her family. So, it's not likely that much is going to change once baby number two comes along. But people can only hope she gives her fans a glimpse inside of this second pregnancy, especially since she was so open in her Instagram announcement. She has just a few months left in her pregnancy to do so.

More Like This
Nick Cannon Announced The Birth Of His 9th Child, A Daughter Named Onyx
Lisa Ann Walter Is A Proud Mom Of Four
Chrissy Teigen Says Her Pregnancy Cravings Are "Comical At This Point"
Kate Middleton Shares What The Royal Kids Were Curious About During Queen's Funeral