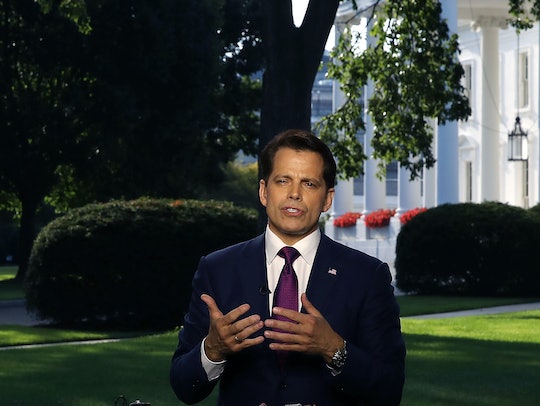 Anthony Scaramucci Will Appear In A Live “Tell All” Event, & Oh Boy

If you had any plans for Friday, you'd better cancel them, because Anthony Scaramucci will appear in a live "tell all" event on Friday, and it's bound to be gold. The only question is which popcorn-eating GIF will most accurately represent America's reaction: Michael Jackson or Stephen Colbert? According to CNN, the event will be broadcast in the daytime "on various live platforms," and former Fox News executive Bill Shine is helping him put it together. Meanwhile, The New York Times has reported that Shine is being considered as Scaramucci's replacement, so the White House has basically devolved into Melrose Place at this point.

Scaramucci gave CNN a sneak peek into his side of the story on Thursday, which includes a claim that he never intended to stay on as the White House Communications Director in the long term. Instead, Scaramucci said, his role was that of a "special purpose vehicle" tasked with reorganizing the White House staff, like Bob Slydell from Office Space, minus the Michael Bolton references. However, he anticipated he'd be in the role for six to nine months. In reality, he was fired after just 10 days (or perspective, it took TMZ a full week longer than that to dig up Beyoncé's twins' names).

But Scaramucci's ultimate downfall was an unhinged, profanity-laden phone call with the New Yorker's Ryan Lizza, published on July 27. During the conversation, Scaramucci repeatedly denigrated Trump's then-Chief of Staff, Reince Priebus, despite claiming just days prior that the two were "like brothers." The following day, Priebus was replaced by retired General John Kelly, who had been serving as the Secretary of Homeland Security for just under six months. Hours later, the New York Post revealed that Scaramucci's wife had left him, reportedly over his devotion to Trump. According to HuffPost, Scaramucci's attendance at the Boy Scout Jamboree from Hell earlier in the week had prevented him from attending the birth of his son. On July 31, Kelly fired him.

Following Scaramucci's ouster, alt-right conspiracy theorist (and apparent "leaker") Mike Cernovich published excerpts from what he claims is an internal White House memo detailing the former Communications Director's plan to overhaul his department. Some gems that will now never come to fruition include a "national online lottery to play a round of golf" with Trump, regular op-eds written by the president, and a Facebook Live Q&A session. It seems the White House did implement one suggestion, however; the call to "vastly increases the amount of visual, video, and graphical images that it produces to communicate our message(s)." That would explain Lara Trump's recent "Real News" Facebook video, which feels like a North Korean propaganda film crossed with an Extra audition tape. Is that what the Mooch had in mind? We'll find out on Friday.