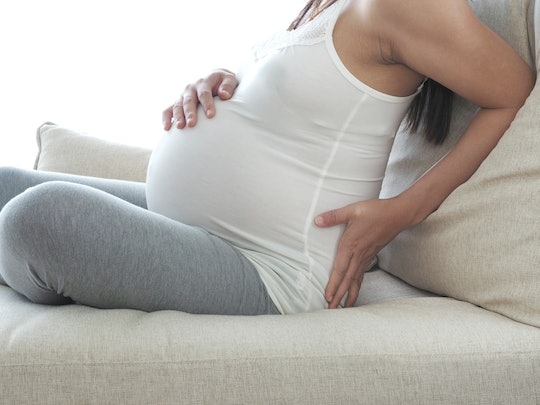 Back Pain During Pregnancy Is Common, But Here's When It Officially Becomes Serious

Contrary to the picnic portrayed by movies and television, pregnancy can be a tough and grueling experience for many women. Along with the weight gain, hormonal changes, and fatigue, pregnancy brings about a plethora of pains. One of the most common pregnancy complaints is back pain, which can be caused by a number of reasons including weight gain and pressure from the baby. It's common, but when is back pain considered serious during pregnancy, and when does it signal a cause for concern?

Romper reached out to Dr. Elizabeth West, OB-GYN at Miller Children’s & Women’s Hospital in Long Beach, California, to find out. She says that while back pain can be extremely common in pregnancy, it can be serious when it is associated with preterm labor. West explains that if your back pain is accompanied by pelvic pressure, abdominal tightening, or rectal pressure, it could be a sign that you need to be evaluated. “Some patients start to feel intense lower back cramping followed by abdominal tightening or pelvic pressure,” she says. “If this happens, they should call their OB-GYN or seek emergency services because they might be going into labor prematurely.”

The Mayo Clinic noted that labor is considered preterm or premature when it happens between week 20 and week 37 of your pregnancy. Along with the symptoms described by West, the Mayo Clinic suggested that some other symptoms and signs of preterm labor may include increased vaginal discharge and leaking fluid. Preterm labor can happen to anyone, but your chances are increased if you are carrying multiples, have uterine or cervical abnormalities, or if you’ve had a premature birth before.

Outside of a preterm birth, back pain is unfortunately just one of those pregnancy pains that most women have to deal with. West says that the pressure of the growing pregnancy causes strain on the lower back, usually starting in the second trimester. “A pregnant woman will have a change in her posture, called lordosis,” explains West, “which is an inward curvature of the spine that helps to compensate for her growing belly.” She says that this change in posture can cause considerable strain and back pain for pregnant women.

Dr. Mary O’Toole, OB-GYN at MemorialCare Saddleback Medical Center in Laguna Hills, California, tells Romper that as your baby grows and the uterus enlarges, it may place extra pressure on the back region, affecting nerves and muscles, and that could cause you to feel symptoms of sciatica. She explains that with sciatica, you might feel something like an electric shock type pain down the back of your legs. “Sciatica symptoms can be normal, but in some women, the symptoms associated with sciatica may be so strong as to cause the woman trouble walking or cause her to limp," O'Toole says.

If you do have normal back pain, O'Toole suggests maintaining regular exercise and stretching, getting massages, using heating pads, or even looking into acupuncture or a chiropractor. Before using any type of pain management, however, make sure to clear it with your doctor so that you know it’s safe for you and your baby.

In an interview with Romper, Dr. Adrienne Zertuche of Atlanta Women's Healthcare explains that while most pregnancy related pain is caused by posture changes, joint laxity, and muscle weakness, there are also a number of causes of back pain that are unrelated to pregnancy, so it is important for a pregnant woman to monitor her symptoms closely and to report any concerns to her obstetrician. She suggests if you have back pain that interferes with daily activities, pain that worsens with coughing or sneezing, pain accompanied weakness, numbness, or bowel or bladder incontinence, or back pain with fever or chills, you should be evaluated.

If you are concerned about your back pain during pregnancy, make sure to talk to your doctor about your concerns. Just keep an eye out for other symptoms that accompany it, like pressure or cramps, which could be an indication of something more serious. At the end of the day, if you feel like something is off, or you aren’t feeling right, just head to the doctor’s office or the hospital. When it comes to the health of you and your baby, it’s best to play it as safe as possible.

More Like This
How To Increase Your Sex Drive While Pregnant
New Report Shows 80% Of Pregnancy-Related Deaths Are Preventable
Can You Mix Breast Milk & Formula? Experts Weigh In
Are You Leaking Amniotic Fluid Or Is It Normal Discharge? Experts Explain