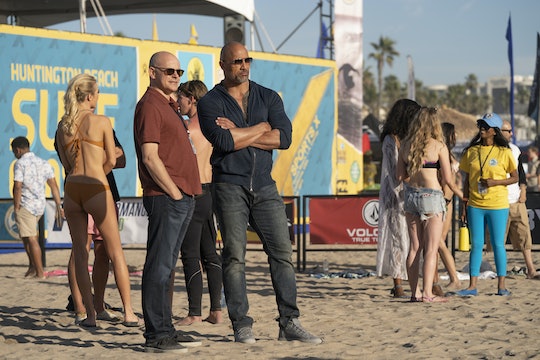 'Ballers' Is Returning With Some Fresh Faces

True Dwayne "The Rock" Johnson fans know that he's not just jumping off of buildings and dealing with CGI creatures on the big screen: he's also the star of Ballers, and it's returning to our small screens (and VOD devices, of course). When is Ballers Season 4? A lot has changed since last season.

Ballers Season 4 premieres Sunday, August 12 at 10 p.m. ET. The show is about current and former football players, primarily Johnson's character, Spencer Strasmore. Spencer is a footballer turned financial manager and in this new season, he and his friend Joe take on an extreme-sports agency. This places them in front of different people, such as new character Lance — played by Russell Brand.

Considering how much the NFL has changed in the last year, it'll be interesting to see how these changes are addressed on the show (if at all). When discussing what they'd like to see from Ballers Season 4, Sports Illustrated said that so far, Ballers has given a non-clichéd look into the world of professional football. The show touches upon issues like how older players handle free agency towards the end of their careers; damage to players' bodies and the resulting painkiller addiction; and weed usage.

This season, however, SI urged the show to deal with the national anthem. As it's been two years now since Colin Kaepernick kneeled to protest police brutality in the United States, it's still super relevant for Ballers to discuss. The national anthem has really changed the rhetoric around sports and the NFL specifically, so it would make sense for Ballers to cover it — as difficult as it may be. Seeing as it's one of the biggest issues in professional football right now, it will be a glaring omission if they don't.

While he didn't discuss this issue, actor Rob Corddry (Joe on Ballers) discussed Season 4 in an interview with the NWI Times. When discussing the show's new face, Russell Brand, he said, "[Russell] is good. He has a very unique presence. I don’t know what it is. If it’s his smile, what he exudes when he talks to you. He really has a knack for putting you at ease. I had a blast with him."

Corddry also revealed that Brand's character plays a villain — which, from watching the trailer, isn't a huge surprise. "This time he is a bad guy, but it’s brilliant because he can play the bad guy well because he is inherently likable," Corddry told the outlet. "You’re going to like him even though he is at odds with the main characters. He just does this so well. I can’t believe he doesn’t do it more."

I don't know where this season is headed specifically, but there's no word yet on if it's the last season or if it's been renewed. Fans will probably have to wait a bit to hear any news on that front. But the NFL, and sports in general, are here to stay, so I think the show has material for years and years to come. With the addition of Russell Brand's character and discussion of "extreme sports," the show will only get that much more interesting. Even I, a non-sports-fan, am excited to check out what The Rock is cooking on Ballers.