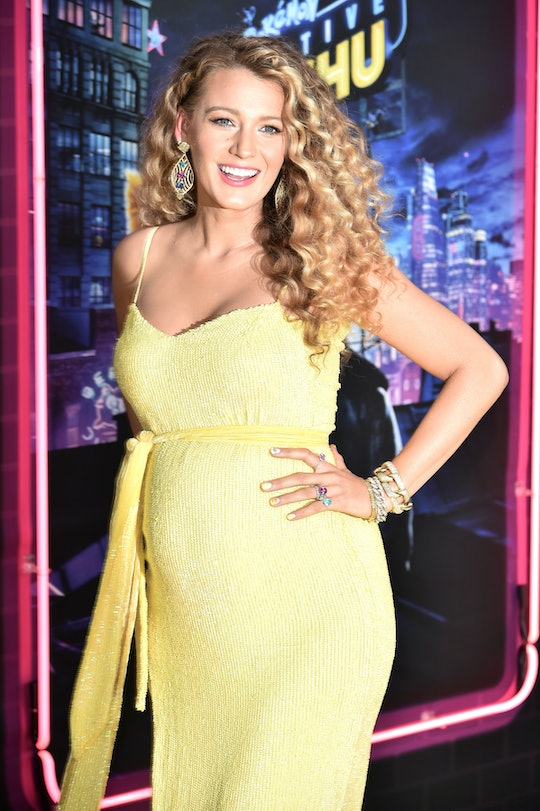 Blake Lively and Ryan Reynolds' sweet family is about to get a little bigger and the couple and their fans are, of course, thrilled for them. The actress revealed that she's pregnant with the couple's third child during the Pokemon: Detective Pikachu premiere in New York City on May 2, according to People. After the event, the 31-year-old posted a photo of herself and her growing baby bump on Instagram, adorably crowning herself the "PokeMOM." With all this excitement surrounding this pregnancy, fans may be wondering when Blake Lively's third baby is due to arrive.

Although Entertainment Tonight reported in April — nearly a month before Lively shared the news — that she and Reynolds were expecting, the actress and her hubby waited another few weeks to go public about the news. This suggests that she was probably waiting to reach a certain point in her pregnancy, as many women do. Of course, there is no "right" time to announce that you're pregnant, as BabyCenter noted, and some women opt to share the news the second they find out. The majority, however, wait until the second trimester to share baby news, as the risk of miscarriage dramatically decreases, according to HealthLine.

For this reason, it seems safe to bet that Lively is at least that far along, which, according to Tommys.org, would puts her somewhere between three and five months pregnant at the moment.

If that's indeed the case, Lively and Reynolds' third baby will probably arrive in the fall, perhaps sometime in September or October.

Understandably, Lively hasn't shared this information with the media or her fans. Her Instagram post confirming that she is, in fact, expecting is her only post about the pregnancy thus far, and Reynolds also hasn't posted about the baby's due date on social media. In fact, he hasn't posted anything about Baby #3 at this time.

While Reynolds hasn't updated his Instagram to reflect on the exciting news, it's clear that he can't wait. He's a doting dad to his two children, and even recently spoke with Extra about how much he loves them. When asked how he thinks his kids will react to his fame one day, Reynolds told the outlet he doesn't think they'll be moved.

"I just think they are going to literally separate their own eyeballs rolling them around me," he joked in his interview with Extra. "When they decide to go away to college, I'm going to be that guy, 'That's so funny, I'm going to NYU, too!' I'm going to be so needy. I love being around them — it's the best thing in the world."

Reynolds and Lively have always taken a comical approach to parenting. The Deadpool actor is known for his tweets about raising his children, many of which are purely for laughs.

In 2017, for instance, he got real about how much easier dads have it than moms — at least in terms of the whole birth thing. Reynolds tweeted that fatherhood "isn't just about eating a huge bag of gummy-bears as your wife gives birth." Oh Ryan...

Lively gave birth to her second child, a daughter named Ines, in September 2016, according to Us Weekly, joining big sister James, who is now 4 years old.

It's unclear if Reynolds and Lively intend to reveal when their next baby is due to arrive, or if they're just going to wait until the baby arrives to share the exciting news. Either way, fans are looking forward to their adorable family getting bigger.