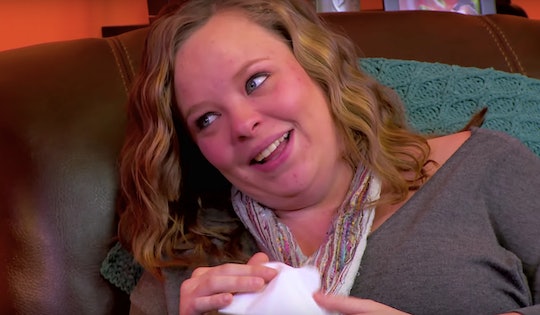 Here's Everything We Know About Catelynn Lowell's Rainbow Baby

You know the saying that sometimes, the biggest gifts come in the smallest packages. Well, that may be true, but they also often come in the most unexpected packages, as this original Teen Mom cast member is finding out. Right now, fans are all wondering: When is Catelynn Lowell due? The mom of two just announced to Us Weekly that she and husband Tyler Baltierra are expecting their third baby.

“The big news is that we are expecting our rainbow baby. This baby is our rainbow after the storm. I’m super excited,” Lowell told the magazine. “It was a huge shock at first. We were not planning it, especially after the miscarriage and how I went downhill with my mental illness.” She added: “We were going to wait a really long time. We were using protection and everything and still got pregnant. This baby just wanted to be here. It was very unexpected.”

Earlier this year, Us Weekly also reported that after suffering a miscarriage, Lowell checked herself into a mental health hospital, as she recognized that she needed help for her anxiety and depression. "Well they say third times a charm… I’m going back to treatment people for 6 weeks to work on my trauma and getting on different meds," she told fans in January, before thanking her husband for his love and support.

However, the family went through a traumatizing period earlier this year, as Lowell's miscarriage was documented on the Teen Mom followup series, Teen Mom OG, as Us Weekly reported. As Baltierra told one of the show's producers: “It was very traumatic. [I saw] her shaking, and she’s got blood everywhere... She kinda like cleaned herself up and we figured what was going on. Spotting’s normal but clotting… all the clots are not. We just sat on the bed and cried. We just held another. There’s nothing you can really do.”

Now, the couple is welcoming their "rainbow baby." Parents reported that the term refers to a pregnancy that follows a miscarriage or stillbirth. Jennifer Kulp-Makarov, M.D., FACOG, told the magazine: "It is called a rainbow baby because it is like a rainbow after a storm: something beautiful after something scary and dark. It is an extremely emotional and devastating experience to lose a pregnancy [or baby]. To create a life or bring a baby into the world after such a loss is amazing like a miracle for these parents."

In 2016, Lowell opened up to Cosmopolitan about why it's important to her to share all the different aspects of her journey, especially regarding her mental health struggles. "It was a hard decision for me to expose everything mentally, but then again, it was also instinctual to just be open and share it," she said. "I feel like a lot of women have postpartum."

Lowell continued: "Mental illness is a serious thing that can take over your life. I've been there and it's taken over mine. A part of me feels like I had depression and panic disorder on top of postpartum, if that makes any sense."

Be that as it is, it's clear that Lowell has taken treatment and recovery seriously, and that despite the setbacks she's endured, she and her family are hopeful for a new future as they look forward to welcoming another baby to their brood.