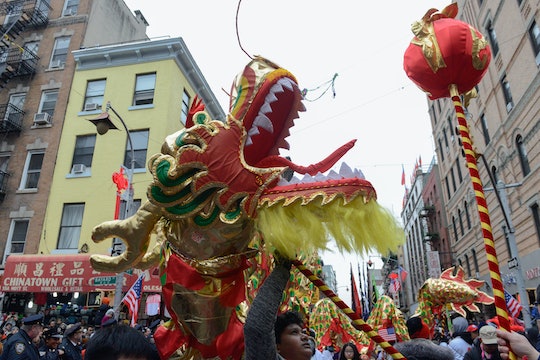 There Are So Many Ways To Celebrate Chinese New Year

By the time February hits, it feels like the holiday season has officially passed by. People have bid adieu to Christmas trees and glowing menorahs, and everyone has finally settled in to the new year. But if you celebrate the Chinese New Year, then the fun is just beginning, right? After all, the celebration — which is wrapped up in more than 4,000 years of history — begins on the first of the Lunar Calendar and lasts until the 15th of the first month. But what does that mean if you operate on the standard Gregorian calendar? Like, when is the Chinese New Year in 2018 and what exactly does this shindig entail? Because it sounds like a good time.

Well, put your party hats on because it turns out the Chinese New Year kicks off today, Friday, February 16. And if you think Times Square is lively on New Year's Eve, then you'll soon find out Auld Lang Syne is rather vanilla compared to this vibrant, colorful festival.

The length of the Chinese New Year festivities is also quite extensive. In fact, preparation for the Chinese New Year — also known as the Spring Festival or Lunar New Year — began on February 8 with the kick off of "Little New Year." The start of Little New Year marks the last half moon of the year on the Lunar Calendar and also signifies a time to chill out, according to Forbes. People begin to slowdown at the office and schools close as everyone tends to last minute preparations for the festivities to come during one of the largest celebrations on Earth.

Once the main event begins, the BBC noted you can count on seeing colorful clothing, family celebrations, parades, special clothing, hanging red lanterns, and even fireworks. (Fun fact: The most fireworks in the world are set off on Chinese New Year's Eve, according to the site ChineseNewYear2018.com.)

It is also Chinese tradition to name the year after one of the twelve animals — rat, ox, tiger, rabbit, dragon, snake, horse, goat, monkey, rooster, dog, and pig — featured in the Chinese zodiac. This Chinese New Year launches the Year of the Dog, the eleventh of all zodiac animals, bringing with it a sense of honesty and loyalty. ChineseNewYear2018.com said about Dogs: "Honest and just, they are popular in social circles. Everyone needs a Dog friend for advice and help. They are also good at helping others find and fix their bad habits."

So which countries celebrate the Chinese New Year anyway? In addition to China, Korea, Vietnam, Laos, and Singapore, many Asian countries celebrate the Lunar New Year as national holidays, according to Voice of America. "The dates of celebration are similar because many countries in Asia interpret the lunar calendar the same way," the radio network noted. Everyone celebrates the holiday differently, but the major through line is a feeling of family and togetherness.

If you're curious about how to say "Happy Lunar New Year!" in Chinese, then Time has you covered. The magazine noted: "'Gong hei fat choy' is the most common Chinese New Year greeting in Cantonese, which is spoken in parts of southern China and Hong Kong." If you were to directly translate it, it means "wishing you great happiness and prosperity." Huffington Post said San Nin Fai Lok (pronounced "san knee fy lock") is another option, simply meaning: "Happy New Year!"

As I already mentioned, decorations for the Chinese New Year include red lanterns, but you can also expect to see kumquat trees, flowers, and red paper cuttings on doors and windows. Lucky foods for the new year include noodles, dumplings, fish, spring rolls and niangao (glutinous rice cake), according to the Independent.

I mean, it kind of sounds like the party of the year, am I right?