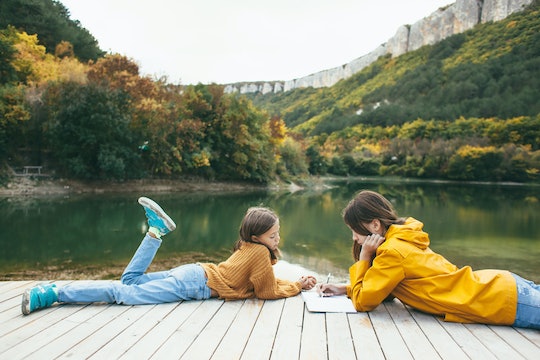 Columbus Day Is Just Around The Corner, So Make Your Long Weekend Plans

Halloween is a pretty big deal for most people, but it's hardly the only holiday in October. In fact, plenty of people get a three-day weekend in the first part of the month, which is beyond thrilling. So when is Columbus Day 2019 after all? The holiday will be here super soon.

A U.S. federal holiday, Columbus Day 2019 falls on Monday, October 14, as noted on Office Holidays. Observed on the second Monday in October, the day commemorates the date Christopher Columbus first landed in the Americas. Although it's a federal holiday, it's OK if this is one date that kind of slips your mind every year. It isn't one of the major holidays. Basically, the postal service might not run, but most businesses and retail operations remain open for Columbus Day, as further noted on Office Holidays. Check with your local school district to see whether your kid will have class that day. With any luck, though, your whole family will enjoy a three-day weekend during this gorgeous autumn month.

Plus, plenty of areas have special celebrations for Columbus Day. Cities such as Boston, Philadelphia, and Chicago host Columbus Day parades each year, so your city might offer similar celebrations. The New York Columbus Day Parade celebrates the city's rich Italian-American culture, as noted in New York Latin Culture Magazine. If you go to one of these parades, expect to see a lot of red, white, and green.

It's important to note that Columbus Day celebrations are (understandably) considered problematic by many people. The outright abuse of native people, as well as the introduction of new diseases to an entire continent, are only a few points of contention. Columbus is not seen as such a historical hero anymore. "There’s definitely a trend toward questioning Columbus Day. Some schools, cities, and institutions, such as the Harvard Graduate School of Education, have adopted Indigenous Peoples’ Day instead. I think that’s part of a larger push nationwide to be critical of our past," said Eric Shed, a veteran history teacher, in the Harvard Graduate School of Education's website. It looks like the old rhyme about crossing the ocean blue in 1492 doesn't tell even part of the story.

So if you'd like to learn more about the other side of the Columbus story — AKA the perspective of the native people — there are more and more resources available now. Events that celebrate Indigenous Peoples Day (or week) are held across the country, including dances, festivals, and speeches that celebrate Native Americans, as noted in Mental Floss. Attending one of these events could become a fun, educational experience for your family. And plenty of these events are super cool. For instance, all visitors to the Native Americans' Day at the Crazy Horse Memorial receive a free buffalo stew lunch, as noted on the memorial's official website. There are plenty of ways to observe the day that don't involve glorifying Columbus, in other words.

Whatever you get up to this October 14 — even if it's just a normal workaday Monday — hopefully you will get to enjoy a little time with your friends and family. Maybe you can even meet up over a bowl of buffalo stew.