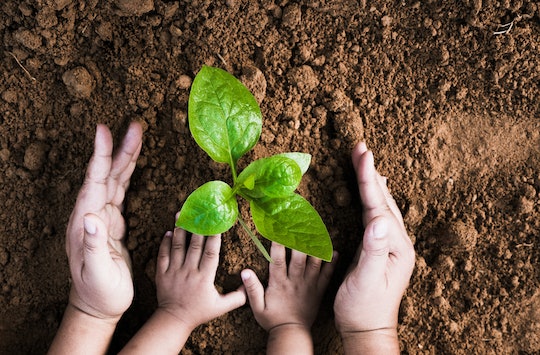 Here's The Theme Of This Year's Earth Day, & How You Can Be Nicer To Mother Earth

In today's busy, tech-filled world, it's especially important to make time for mother nature and the natural environment. Fortunately, one holiday every April makes that easy. On Earth Day 2018, why not take this opportunity to learn more about current environmental concerns, as well as work toward making positive changes for the planet. Hey, it's pretty important to honor the only planet that currently supports human life.

This year's Earth Day falls on Sunday April 22, 2018, according to the organization's official website. For the 2018 event, the focus is on ending plastic pollution. "Single-use plastics are one of the biggest things hurting the environment," said Earth Day Network president Kathleen Rogers to Textbooks.com. From disposable drinking straws to throwaway grocery bags, these plastics generate a lot of waste. Despite recycling efforts, around 10 to 20 million tons of plastic goes into the oceans each year, according to a 2015 report from Worldwatch Institute. And it doesn't just go away, either. A single plastic drink bottle can take about 450 years to break down into smaller pieces, as noted by the National Oceanic and Atmospheric Administration Marine Debris Program (NOAA). And plastic never fully biodegrades, either. It just turns into very small pieces known as microplastics that can still trouble marine life, as further noted by NOAA.

But before you get totally bummed out by this information — and it is depressing to be honest — remember that there are plenty of ways to get involved this Earth Day to help combat plastic waste. As an individual, you can review the Plastic Pollution Primer and Action Toolkit from the Earth Day Network. It will help you learn more about the issue and reduce your own plastic consumption. You can then create social media posts with #EarthDay2018, #EndPlasticPollution, #lessplastic, and #plasticless to raise more awareness about the issue. Simply taking small steps in your daily life by using reusable grocery bags and drink bottles makes a difference, too. This alone can do a lot of good, especially if millions of people participate.

To take the next step, look for Earth Day events in your city to get more involved with like-minded people. For instance, people in New York City can enjoy events such as a 5K walking tour and a Union Square Earth Day festival block party, according to Time Out New York. Generally, these April 22 events are fun celebrations of the natural world, so check out your city's offerings. If nothing in particular is going on, consider starting your own event.

Also remember that the Earth Day Network site offers resources for people who want to make their local schools and other organizations less dependent on plastic. There's still a lot of work to be done on April 23 and beyond, so don't worry if you're unable to do much on Earth Day itself.

Since its beginning in 1970, the annual Earth Day celebrations have had a major impact on environmental concerns worldwide. In fact, the original Earth Day, which involved millions of Americans demonstrating in cities across the United States, resulted in the creation of the Environmental Protection Agency, according to the EPA's website. Now billed as the world's largest environmental movement, the Earth Day Network works with 50,000 partners in nearly 200 countries to bring about positive environmental change, according to the organization's website. At last count, over one billion people take part in Earth Day activities each year, making it a massive civic observance.

With the 50th anniversary of Earth Day coming up in 2020, communities the world over are planning an extra-special celebration for a couple of years from now. Consider getting involved starting today and helping this organization continue its environmental missions.