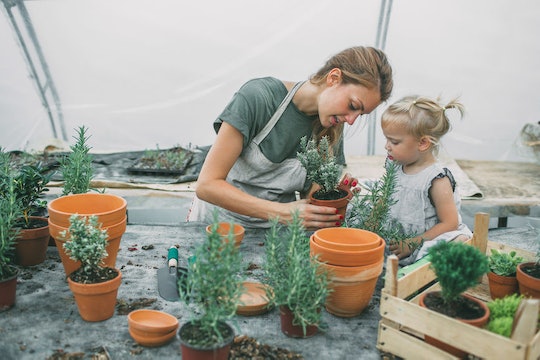 Our Planet Needs Some Love This Earth Day More Than Ever

One of my favorite spring activities is planting trees for Earth Day, especially now that I have kids and I want to teach them to be good stewards of our planet. But when is Earth Day 2019, because it is definitely one holiday that always seems to sneak up on me, and I certainly don't want to miss it this year of all years.

It turns out Earth Day always falls on the same day in spring — April 22 — which happens to be a Monday this year. While I've always been keen on participating in this global day of environmental awareness, this year's Earth Day feels especially important. It feels less like a fun recreational activity and more like a day of vital action to preserve our planet. In fact, the Earth Day Network has given Earth Day 2019 a very poignant theme: Protect Our Species.

It's a fitting one given the current statistics surrounding global warming. Scientists have predicted that 2019 could be the hottest year in human history, according to National Geographic, and that's saying something since the four hottest years on record also happened to be the last four year (2015-2018). The Economist also reported that the number of weather-related disasters are starkly on the rise — with incidents worldwide quadrupling since 1970. What's more, we're "losing species at 1,000 to 10,000 times the background rate, with literally dozens going extinct every day," according to the Center for Biological Diversity.

Yet, President Trump's 2020 budget proposes to cut funding to the Environmental Protection Agency (EPA) by a whopping 31 percent, reported The Hill. I can't help but feel enraged over the seeming disconnect between what the numbers are saying and what our elected leaders are doing. It's clear that I'm not alone in feeling this way. Teenagers from around the world are poised to participate in the Youth Climate Strike on March 15 to raise awareness about the severity of global warming and to demand action, according to KALW.

“We, the youth of America, are striking because decades of inaction has left us with just 11 years to change the trajectory of the worst effects of climate change, according to the October 2018 UN IPCC Report,” explains a statement on the Youth Climate Strike website.

I know of several high schoolers planning to walk out of school on Friday to participate in the global climate strike. I couldn't be prouder of this movement, led by young people.

If you're looking for ways to get involved, there are plenty of cool Earth Day activities to take part in. You can check to see if there are any Earth Day festivals near you here, or use Facebook to see what's happening in your area. Take the time to write a letter to your senator or representative and let them know how you feel about certain legislation, like AOC's Green New Deal.

Of course, you can always plant some Earth Day trees, whether it's with a local organization or in your own backyard. It might seem like such a small thing, but trees can "help reduce the impacts of climate change by pulling greenhouse gases from the atmosphere," according to National Geographic.

In my opinion, it's all about just getting out there and doing something, anything, to tackle the issues at hand.