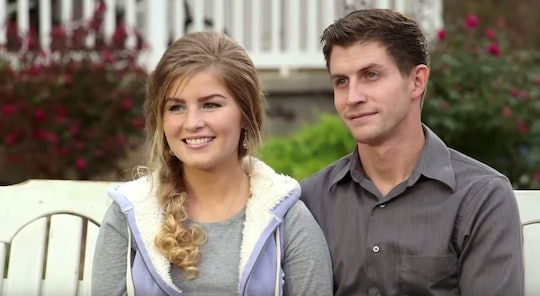 Fans of reality TV shows featuring large families — like the Duggars and the Bateses — probably find it difficult to keep up with all the pregnancies. Especially since so many Duggar and Bates couples have announced they're expecting this year. In fact, plenty of viewers have likely wondered: When is Erin Bates due? The Bringing Up Bates star will be busy over the holidays, that's for sure.

As a refresher, Erin is the third oldest child of Gil and Kelly-Jo Bates — the Tennessee couple who, like their Arkansas friends Michelle and Jim Bob Duggar, have a whopping 19 children. Erin and her husband Chad Paine announced in June that they're expecting their fourth child together, People reported. “It’s official, baby number four is on the way!” Erin and Chad said in a statement to UPtv. “We know that life is fixing to get even crazier but we’re getting ready for more laughs and more love and celebrating every moment along the way!”

In July — via a joint announcement with sister-in-law Whitney Bates — Erin revealed a baby girl named Holland will soon be joining big brother Carson, 4, and big sisters Brooklyn, 2, and Everly, 1,. “We are overwhelmed with the support we have received from people on social media and thank everyone for their kind words and prayers,” Erin and Whitney told HollywoodLife at the time. “These two girls are already so loved and cherished by their older brothers and sisters. They can’t wait to meet Holland and Khloé and shower them with hugs and kisses.”

The corresponding social media sex reveal gave fans a better idea of when, exactly, miss Holland will be joining her family. "It’s raining GIRLS!" Erin wrote on Instagram, alongside a photo of herself cradling her bump with one hand and holding an umbrella with the other. "We are already so in love with Holland Grace, due to arrive in December! I’m so grateful to be in this journey with my sister-‘n-law."

There you have it! Erin Bates is due with her fourth child in December — although it's still difficult to nail down a specific due date. A Sept. 2 Instagram post, however, offers a clue, thanks to the oddly specific hashtag Erin included: #23weeks3days. Counting up from there, that would make her due date sometime around Dec. 27. But as seasoned parents already know, a due date doesn't guarantee your little one will actually be born on that day. In fact, it's pretty darn rare for babies to arrive on their due dates at all.

So who knows? Will baby number four be born in December or January? In 2019 or 2020? Or perhaps on Christmas Day? I guess we'll just have to wait and find out. Whenever the big day ultimately comes, expecting a baby near the holidays must be such a special feeling. And And I'm sure if baby Holland is born on Dec. 25, her arrival will remain one of the best — and most memorable — Christmas presents ever.