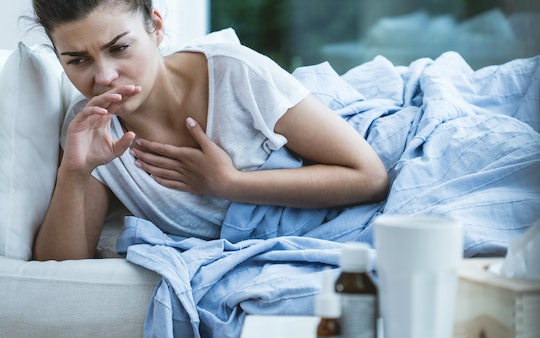 Is Flu Season Almost Over? Don't Hold Your Breath

This year's flu season seems to be never-ending. For everyone, especially moms, the worry is acute and terrifying. It seems like each week brings more and more heartbreaking news of a child's death at the hands of influenza. There's also the added worry over the risk of contracting the flu yourself. But how long could this virus possibly last? When is flu season over? Because it feels longer than ever this year.

Thankfully, the flu may have just hit its plateau, according to reports from the Centers for Disease Control and Prevention (CDC). This past week, there was no significant increase in the number of cases diagnosed or the number of deaths attributable to influenza. However, according to the CDC, the flu season is long, and the end isn't quite in sight as of yet. On average, as per their guidelines, the flu season lasts around six to seven months, but this year it started earlier than usual, about mid-September. It typically falls sharply in mid-April, but there are cases that pop up later than that.

The CDC also reiterated this week that if you haven't yet received the flu vaccine for this year, that you should do so now.

Unfortunately, however, there is a risk of contracting the flu the all year long, according to Dr. Stephanie Long in an interview with Popsugar. This is not the norm, but there is influenza amongst the population regardless of the season.

The amount of interseasonal flu diagnosed in any given region is influenced by a number of factors; it isn't well understood, but recent studies suggest it might be largely dependent on the climate of the affected region, according to PLOS. Their research found that most cases of influenza are documented during the winter season in temperate climates. However, in sub-tropical and tropical climates, the flu virus spreads more throughout the year.

Researchers suggest that either something in the humid, hot air must be responsible for the flu spreading during warmer periods, or it has to do with the behavioral pattern of the people who are contracting the flu at these odd times throughout the year that makes them more susceptible to the flu virus. People in tropical climates tend to spend more time in the more comfortable ambient temperature of the indoors during the summer. Recycled air and close confines appear to play a role in spreading germs, according to the study.

As per the CDC, the flu season has plateaued roughly at the same time for the past few years — sometime around early February — but due to multiple factors, such as the virulence of strain and the effectiveness of the vaccine made for this season, this year's flu seems to be hitting its peak later in the year than in previous seasons. So, when will the flu season end this year? Not for a while. Typically, flu activity "can last as late as May", noted the CDC.

That means we still need to focus firmly on prevention. Get the flu shot if you haven't yet received one. There is plenty available, and for many insured people, it's completely free, according to the U.S. Department of Health and Human Services. In New York State, pharmacies can administer the vaccine to patients as young as 2 years old. While the flu vaccine may not be the most effective this year, it may shorten the duration of the flu and the severity, according to the American Society of Microbiology.

On top of being vaccinated, be proactive when protecting yourself and others by washing your hands throughout the day with warm soapy water for at least 20 seconds at a time. Also, cough and sneeze into your elbow instead of into your hand, and avoid touching your eyes, nose, and mouth.

When in doubt, sanitize. The only other alternative is to live in a bubble, and those are really pricey.