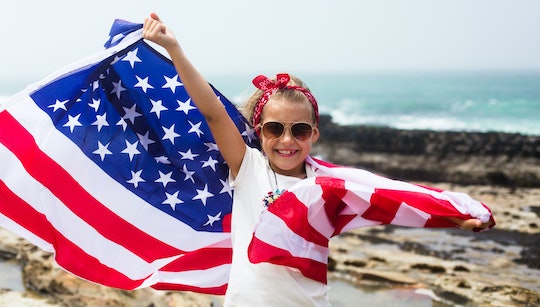 Here's When The Fourth Of July Weekend Is This Year, Because It's A Little Confusing

The Fourth of July is the perfect holiday to call up your friends and family, fire up the grill, and enjoy some fireworks shows over the long, chill weekend. But sometimes that weekend is not well defined by the calendar. Really, when is Fourth of July weekend for 2018? When the actual fourth day of July falls on a Wednesday, it isn't clear whether you get an automatic three-day weekend at all. It's OK if you're confused.

In a way, there isn't an official Fourth of July weekend for 2018, because the answer will vary for everyone. Officially, Independence Day is a nationally recognized holiday that will fall on Wednesday, July 4, in 2018, according to Federal Pay. So plenty of people in the United States will still have Wednesday off of work. Depending on your work or school schedule, however, July 2, 3, 5, and 6 are all still fair game. In a way, Independence Day is kind of a standalone holiday this year, not an automatic three-day weekend. And because there isn't a clear Fourth of July weekend this year, you'll need to seriously coordinate any plans with friends and family ahead of time. Otherwise, folks might show up to your backyard cookout a week late, and nobody wants to deal with that awkward situation.

The last time the Fourth of July fell on a Wednesday happened in 2012, and it annoyed a bunch of people. For plenty of workers, creating a long weekend out of the holiday involves taking two vacation days from work, not something many people in the U.S. can do lightly, as noted in The Atlantic. This dilemma affected the tourism industry as well. "The midweek holiday seems to have travelers confused," said Anthony Del Gaudio, vice president of hotel sales for Loews Hotels, in Business Insider. The lack of a clear Fourth of July weekend is annoying for would-be tourists and people in the tourism industry alike. It's safe to say most everyone prefers the clear-cut long weekend.

There are still ways to make the best of this year's calendar, though. Your best bet is to check out the events in your own city each day, confer with friends and family, and just pick a weekend to celebrate. Better yet, celebrate both weekends and also on Wednesday. Hey, your grill needs to get more use anyway, so why not plan on a double cookout?

Even if you can't make the holiday a whole weekend thing, there is also a lot to be said for simply enjoying Independence Day all on its own. A day off is still a day off, and there is plenty to do on Wednesday, the Fourth of July, this year. Most of the major Independence Day celebrations will be on Wednesday, anyway. This includes the Boston Pops Fireworks Spectacular, the Macy's 4th of July Fireworks, and the infamous Nathan's Famous Hot Dog Eating Contest. Seriously, there is something fitting about the fact that the hot dog eating contest falls on Independence Day. "Competitive eating is the lens through which our humanity is revealed,” said Major League Eating Chair George Shea on Fox 43. “Competing against world champ Joey Chestnut on the big stage in Coney Island on July 4 is the dream of any patriot.” Hey, the founding fathers could have never imagined what Americans would one day celebrate on Independence Day.

Even if you don't get a long weekend, you can still watch the competitive eaters battle it out on Wednesday, and then enjoy some explosions in the sky. Whatever day of the week it falls on, the Fourth of July is a spectacular holiday.