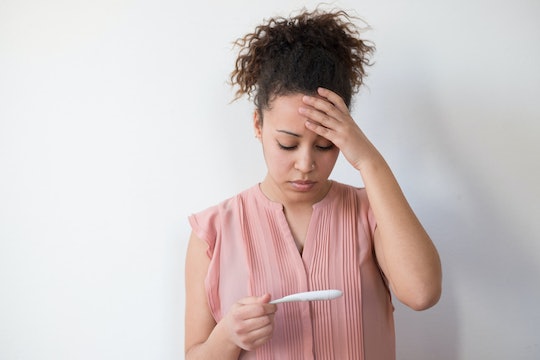 When Is HCG Out Of Your System After A Miscarriage?

Suffering a miscarriage is one of the worst things a woman can face. The loss of a baby can bring about a range of emotions, and for some women, the hormonal changes can be challenging, too. After all, your body was preparing for pregnancy and now it has to do the opposite. Many women who try to conceive again following a miscarriage may be concerned about false positive test results because of the amount of hCG leftover from their previous pregnancy. So when is hCG out of your system after a miscarriage?

More Like This
Yes, You Can Still Get Pregnant — Even If You’re “Leaking” After Sex
The Best Time To Get Pregnant Requires Some Math
Pool Cannonballs Are Pretty Much A No-Go During Pregnancy
Let’s Bust All The Myths About The COVID Vaccine & Fertility

First things first: human chorionic gonadotropin, or beta hCG, is a protein-based hormone that is found in high levels during early pregnancy, per Healthline. “[The] hormone [is] produced by an embryo as it implants and establishes itself as a pregnancy,” Dr. Lucky Sekhon, New York City-based fertility specialist and board-certified OB-GYN, tells Romper in an email. Pregnancy tests detect hCG in the urine, though it’s also found in blood.

Romper also reached out to Dr. Kathryn Wright, OB-GYN with Facey Medical Group. She says the pregnancy hormone decreases rapidly in the first several days after the products of conception pass (miscarriage), but the decrease to zero can take weeks.

While the beta hCG doubles about every two days in a typical growing pregnancy, there is no way to calculate how fast it will go back down. “It varies from person to person,” explains Wright. During miscarriage, hCG levels will “usually fall, plateau, or rise abnormally slow,” Dr. Brennan Lang, OB-GYN, told Parents. In this case, a slow rise is considered less than 35% over 48 hours (as opposed to a full-term pregnancy, in which it will usually double or increase by 50%). The hormone has a long half-life where is takes approximately 24 to 36 hours for half of the hCG to leave the system. “The length of time required for hCG to completely leave the body is therefore a function of what the starting level was at time of miscarriage. The farther into the first trimester, the higher the initial starting hCG level and the longer it will take for that amount of hCG to be cleared from the system,” Dr. Sekhon tells Romper.

Most hormones (like estrogen and progesterone) increase steadily during pregnancy, but hCG behaves differently. Your hCG levels increase until weeks eight to 10 of pregnancy, per Parents, and then decline and taper off until the baby is born. But if you have suffered a pregnancy loss, as Parents noted, your hCG levels will decrease and return to their pre-pregnancy levels about four to six weeks after the miscarriage.

Depending on how your pregnancy ended, whether by spontaneous miscarriage, an abortion, natural delivery, or a D & C procedure, the levels and rate of decrease of the hCG left in your system can differ. “Studies have shown women who have a procedure to remove an abnormal pregnancy versus those that use medical means (pills to induce cramping) or wait to pass the abnormal pregnancy on their own will have a faster time to recovery/negative HCG level,” Dr. Sekhon says.

Along with testing your hCG levels, the Mayo Clinic noted that if you have had more than one pregnancy loss, your healthcare provider may suggest you have other blood tests and ultrasounds to rule out any health issues like chromosomal abnormalities, problems with hormones or your immune system, or uterine fibroids or obstructions in your fallopian tubes. These tests, the article mentioned, can identify any underlying causes of your miscarriage so that it can be addressed and taken care of before you try getting pregnant again.

If you feel like it’s taking a long time for your hCG levels to return to zero (this can be confirmed through a blood test), it’s possible that you’ve, “'retained products of conception' which is another way of describing a failed pregnancy/miscarriage/abortion where pregnancy tissue remains inside the uterus and continues to excrete HCG,” Dr. Sekhon tells Romper. “If a patient has retained pregnancy tissue, this needs to be treated either with medication to induce cramping and evacuation of the uterus or a procedure where the uterus is emptied using gentle suction or scraping of the lining of the uterine cavity.” She adds that there are other, more rare reasons for consistently elevated levels of hCG including gestational trophoblastic disease.

The last thing you need after suffering a loss is anxiety and stress due to confusing pregnancy tests. With time and some patience, you'll hopefully see a positive test — with soaring hCG levels.

This article was originally published on Sep. 14, 2017