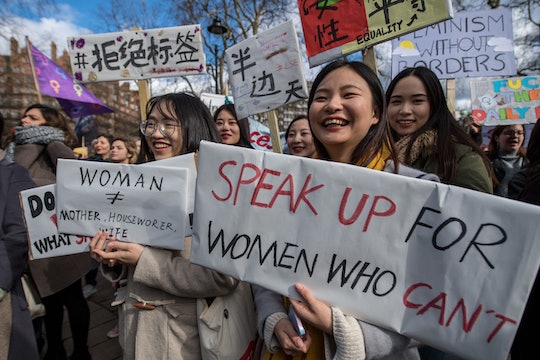 International Women's Day Is Coming In Hot, So Get Your Squad Ready

Women had a pretty kick-ass 2018. From new legislation that increased gender equality in countries like Iceland and Saudi Arabia to women winning 20 percent of the seats in the U.S. congress, ladies dominated the stage at every turn. International Women's Day is on March 8, 2019, and it's an especially appropriate time to celebrate the amazing accomplishments of fierce females everywhere, whether you're honoring your fave female politicians or shouting out the strong women who make your everyday life better.

International Women's Day — "a global day celebrating the social, economic, cultural and political achievements of women" as the holiday's website explains it — has been celebrated on March 8 every year since 1914, and the day has evolved from the fight for voting rights for women all over the world to a new emphasis on putting women in positions of power and celebrating their accomplishments. (Check out the full history of the day for more info). IWD is one of the best celebrations of girl power because it's global and isn't tied to any specific organization or political party, so take the day to honor powerful women in your life no matter where you're from or which side of the political aisle you fall on. There are a myriad of ways to celebrate the day no matter how busy you are — just a quick tweet or insta post can help spread awareness. Take a peek.

I'm feeling the feminist power flowing through my veins already. Although celebrating women's global successes and calls to action for increased gender equality are always key points of IWD, each year focuses on a specific mission that is to be carried out throughout the year. Last year's was "Time Is Now" and focused on rural and urban activists' efforts, according to the UN website. Per the IWD website, 2019's theme is #BalanceForBetter, and it calls for people everywhere to "build a gender-balanced world," emphasizing the important role women and men play in creating the equality-based future activists crave. IWD organizers explain their gender inclusive theme choice on their site:

The logical take on gender equality is somewhat novel in the wake of the #MeToo and Time's Up movements that rightfully highlight the legal, political, and emotional ramifications sexual harassment and assault have on women and society as a whole, as well as the overall impediment a culture of permissible violence against an entire gender has on women's ability to reach their full potential. But this practical approach is equally important as the fight for total equality continues. Companies are more successful when women play leadership roles, and ignoring this causes companies to fall behind. Indeed, a 2016 study from the Peterson Institute for International Economics found that "the presence of women in corporate leadership positions may improve firm performance," and an MTI study from 2014 found that "shifting from an all-male or all-female office to one split evenly along gender lines could increase revenue by roughly 41 percent" according to MIT News, giving IWD's focus on creating more balance on the global scale total credibility.

So as you celebrate International Women's Day this year, think of the ways you can create more gender-balanced environments in your life, because we'll all benefit from businesses that look more like the makeup of the world. Stay strong, sisters.