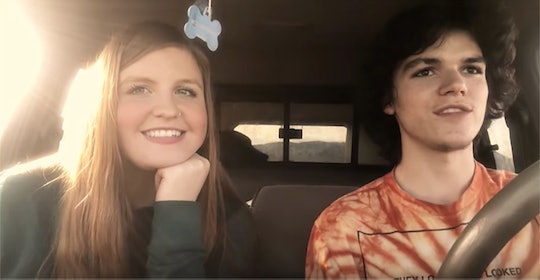 Out of all of the Roloff siblings, 21-year-old Jacob is probably the most low-key considering he hasn't appeared on Little People, Big World for years. But just because Jacob isn't on reality TV anymore, it doesn't mean he isn't busy. In addition to writing multiple books, Jacob is also set to marry his fiancée, Isabel Rock. And understandably, long-time fans want to know when Jacob Roloff is getting married, a question Rock answered on Friday, Sept. 7, as People reported. As it turns out, the couple is headed to the altar pretty soon.

Fans might be remember when Roloff quit LPBW sometime in 2014 amid a lot of drama, according to In Touch Weekly. Roloff wrote in his personal blog that reality TV wasn't for him, and he distanced himself from the show on social media. Overall, it seems like Roloff's exit from LPBW was a stressful period in his life.

However, since then, things seem to being going really well for Roloff. He's published two books in the course of one year — Out To See and Verbing — and he got engaged to Rock in December 2017, as People reported. Roloff popped the question during a romantic trip to Iceland (how cinematic), a moment Rock detailed in a blog post she shared to How He Asked.

Rock revealed that Roloff led to her the middle of pond located in Reykjavik, a move she wasn't sure about at first. She recalled, according How He Asked:

It was a small lake in the middle of the city, and it was completely frozen over at the time! Jacob immediately wanted to walk out onto it, but I was admittedly a little afraid we would fall through. It was obvious by all of the other people we saw walking on it, and even ice skating on it, that it was safe, so I took a chance, grabbed his hand and he lead me to the middle of it.

Roloff then pulled Rock's "dream ring" out of his pocket before asking the million dollar question. Of course, Rock said yes.

So, when will Rock and Roloff trade vows? Rock revealed the date in a post detailing her "challenging" life changes. It's not easy planning a wedding while you're in school and managing a business, y'all. She wrote, according to Instagram:

I will be honest, because I value transparency and vulnerability on here... This has been a really challenging season of life for me, and for us, and we have been in ‘transition’ for what feels like an eternity. I know it is all part of our journey, and I am trying to honor that while also manage my anxiety. Planning a wedding, going back to school, finding a place to live that fits us and gives us a sense of community, always fixing our beloved van, while also trying to manage an art business has felt a wee bit overwhelming for me at times.

Although Rock is in eye of the storm right now, she's confident everything will work out by the time the couple's wedding date of *Sept. 7, 2019* rolls around. She added:

I have faith that all of it will lead us to where we are supposed to be, and each day brings new blessings (trying so hard to believe that). Focusing on the present moment and recognizing that being engaged only exists for a short time, and soon enough—ONE YEAR FROM TODAY—we will finally be married and it will be the best day of our lives. #rockandroloffwedding.

Although the couple's wedding won't be televised, I bet the two will share pictures of their happy day for the longtime LPBW fans. Congrats, guys.