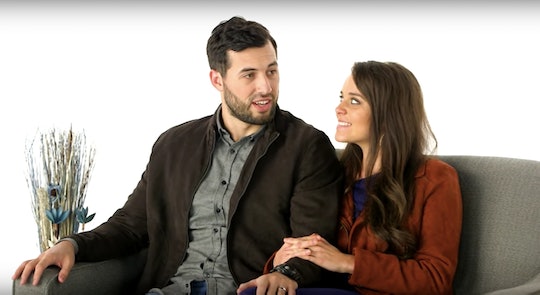 Well, the Kardashians aren't the only family to be growing exponentially. Yes, Jinger Duggar is officially pregnant, and fans couldn't be more thrilled for the mom-to-be. And now that the cat's out of the bag, people can't help but wonder about when Jinger Duggar is due. The so-called "rebel" of the Duggar family just announced her happy news, and it seems that she isn't too far along.

On Wednesday, Jinger and her husband, Jeremy Vuolo, took to their blog to announce that they are expecting their first child together, and they both seemed seriously ecstatic about it. On their website, the happy couple wrote:

The past fourteen months have been the best of our lives as we have had the wonderful privilege of beginning our journey through life together in marriage. We both looked forward to the joys of marriage but neither one of us fully understood just how amazing the start of this journey would be. ... Now, the journey has taken an exciting turn: we are expecting our first child! We are praising God for this beautiful gift and ask that you join us in praying for a safe and healthy pregnancy.

Additionally, Jinger and Jeremy also included a video on their website of them announcing their exciting news. While the text of their message wasn't too revealing, in the video they explain that they don't know the sex of the baby yet, which probably means that she's less than 16 weeks along, likely somewhere in her second trimester, which is the earliest a woman can find out the sex, according to BabyCenter.

It would make sense that Jinger is somewhere in her second trimester right now. Most women choose to wait until after they're through their first trimester before letting the world know that they're pregnant as most miscarriages occur within the first trimester, according to Very Well. And after those initial 12 weeks have passed, the risks of losing the baby significantly decrease, the outlet notes.

So, it's likely that Jinger is between 12 and 16 weeks along, which could mean that she's due sometime in July or August. Likely, though Jinger will follow in her sisters' footsteps and keep her fans updated about her pregnancy journey along the way. The 24-year-old has a pretty active social media presence and seems to love sharing her life with her Counting On fans. So, much like her sister Joy-Anna has done a good job with keeping her followers fairly up to date on the state of her pregnancy, hopefully Jinger will do the same.

Another thing to be hopeful about? Well, remember how I said Jinger was considered to be pretty rebellious by Duggar standards? Well, it's not just because she dares to wear pants instead of only skirts. Oh no, Jinger is also thought to be somewhat different because she didn't immediately get pregnant right after getting married.

Compared to other members of the Duggar family, Jinger, even though she's not even 25 years old, is quite late in having kids. Yes, you read that correctly. Jinger's sister, Joy-Anna, announced her pregnancy only three months after her wedding in May, and she's not the only one to move quickly. Jessa Duggar announced that she was expecting only four months after she was married, and Jill Duggar waited only eight weeks before letting the world know that she was expecting.

As for Jinger and Jeremy, it's seems as though their personal plan for growing their family has worked perfectly for them and they look like they couldn't be happier right now. In addition to announcing their highly-anticipated good news, the couple also shared a Bible verse, Psalm 139:13-14, close to their hearts:

For you formed my inward parts; you knitted me together in my mother’s womb. ... I praise you, for I am fearfully and wonderfully made. Wonderful are your works; my soul knows it very well.

Congratulations, Jinger and Jeremy! The world is so excited to meet your bundle of joy, whenever that may be.