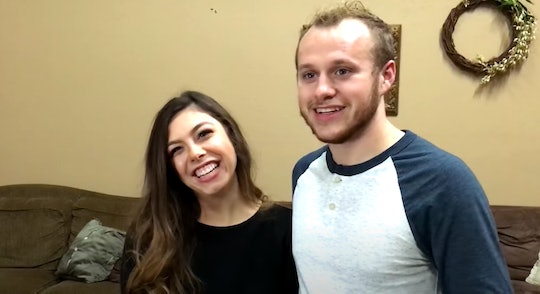 When Is Josiah Duggar's Wedding? Chances Are, It's Just Around The Corner

There's a Duggar wedding around the corner, you guys! Okay, so no one should be completely shocked about yet another Counting On engagement. But it's still pretty exciting, nevertheless. This time around, it's Jim Bob and Michelle's eighth child, Josiah, that has found the woman of his dreams — in longtime family friend, Lauren Swanson. The couple just announced their engagement on Monday and already, fans are probably wondering: When is Josiah Duggar's wedding? Chances are, Counting On fans won't have to wait too long.

Josiah, 21, and Lauren Swanson, 18, revealed they had entered into a courtship back in January, People reported. “We are overjoyed to begin this new phase of our lives together," Duggar and Swanson told the publication. "Through the years our families’ friendship has allowed us to get to know one another as friends. I can definitely say I have found a great friend … even better than I could have hoped for or imagined." Just six weeks later, the couple decided to take their relationship to the next step. On March 5, the lovebirds announced they are engaged, E! Online reported.

It didn't take Duggar long to make the news Instagram official, either. "I feel like the most blessed guy on earth ... Lauren said YES!" he wrote, alongside a photo of the happy couple. "God definitely opened our eyes in his perfect timing to show us how we complete each other. The more time I spend with Lauren the more I realize how I can't live without her. There's no one else I'd rather spend my days and grow old with!"

If you remember, Swanson is technically Duggar's second relationship — as he courted Marjorie Jackson for fourth months before breaking it off in March 2016. “Marjorie and I had a good time together,” Duggar told People at the time. “We were just trying to follow God’s lead on everything. She didn’t feel that it was the right timing then, so we called it quits for a bit.” Although Duggar's courtship with Jackson didn't work out in the end, it's a pretty safe bet that he will be walking down the aisle with Swanson; no child of Michelle and Jim Bob has called off a relationship once engaged, after all.

And if the timeline of Josiah's engagement is anything like that of his older siblings, a wedding will be happening sooner rather than later. Exhibit A: His sister, Joy-Anna, was engaged to Austin Forsyth for less than three months before they tied the knot in May, according to People. Joseph Duggar was only engaged to Kendra Caldwell for about four months before they married in September, Us Weekly reported. And Jinger wed Jeremy Vuolo in November after a four-month engagement. I could continue with Josiah's other married siblings, Josh, Jill, and Jessa — but I think you get the gist. Once a Duggar is sure about "the one," they don't waste any time getting to that altar.

I'm going to go out on a limb and guess that the Duggar family's strict rules about physical contact during courtship and engagement might have something to do with this quick turnaround. Although each couple reportedly gets to set their own rules, in general, side hugs are the only physical contact allowed while courting, and the couple must have a chaperone at all times. (Even while texting!) Once engaged, the rules loosen — but only slightly. Hand-holding is typically fair game once there's a ring involved, as well as saying, "I love you." But the side-hugs-only rule stays. And those chaperones? Yeah, they stick around until marriage, too.

With such heavy restrictions on what couples can do before marriage, it makes sense that there's a certain sense of urgency when it comes to saying, "I do." And who could blame them? They're only human, after all. So I'm calling it now: It's entirely possible that Josiah Duggar and Lauren Swanson could have a summer wedding.