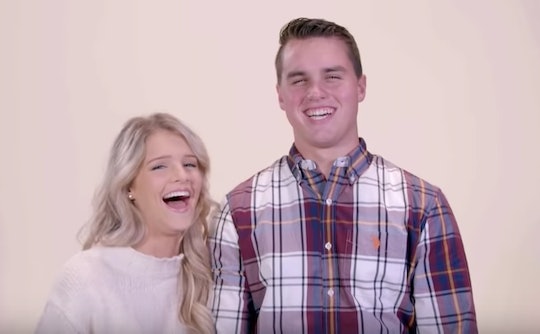 Congrats are in order, because the Bates family will soon expand by one more! On Wednesday, Josie Bates announced that she and her husband, Kelton Balka, are expecting their first child together and fans are probably dying to know when Josie Bates is due to welcome her bundle of joy. Let's just say, the happy couple will meet their newest addition this summer.

After fans watched the 10th oldest Bates child get married to the "love of her life" in October, according to Us Weekly, fans couldn't help but fall in love with their story. Really, the way they talk about each other could not be sweeter. "I can truly say Josie is the love of my life, my soulmate, and the only one I could ever imagine spending forever with," Balka has said of Bates, according to Knox News.

Given how head-over-heels in love they are with each other, it's so exciting to hear that Bates and Balka are expecting their first child together, as the couple revealed in an interview with In Touch Weekly.

"We can hardly believe it," Bates told In Touch Weekly. "We are already so in love with our little one and very thankful to God for his blessing on our life as we start our little family."

How sweet is that?

And the best part is, Bringing Up Bates fans won't have to wait too long to meet Bates and Balka's newest addition to the world. Bates revealed to InTouch Weekly that their baby will be due in July, which is just five months away. This means that Bates is well into her second trimester and has the first four months of her pregnancy down.

So, the fact that she has been able to keep her pregnancy a secret for this long is pretty amazing. Judging from Bates' Instagram account, it's impossible to tell that she had something to hide (especially a secret as big as this) from her fans.

Although Josie's parents, Gil and Kelly Bates might have stopped having babies at number 19, the amount of grandkids they have just keeps on growing. This past November, Tori Bates gave birth to the family's ninth grandchild, and in early 2018, siblings Erin and Alyssa Bates gave birth to daughters, just two days apart from each other, according to Knox News. With Josie's pregnancy, this means that she will round out the number of Bates grandkids and bring the total up to 10.

But, it's unclear how much Josie will share about her pregnancy with the rest of the world. While Josie and Balka do know their baby's sex and have a few names in mind, according to InTouch Weekly, they're unsure if they're ready to share those things with fans just yet.

But, now that this news is finally out in the open, hopefully Josie and her husband will bring fans along on their very exciting journey.