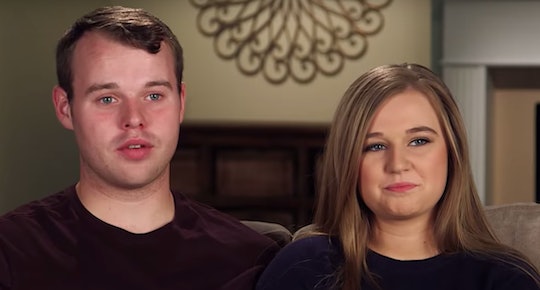 Here's When Kendra Duggar Could Give Birth To Baby #2

The Duggar family is growing again. Joseph Duggar and his wife revealed this week that they're expecting another baby together and fans are obviously curious about when Kendra Duggar is due with the couple's baby-to-be. The Counting On stars announced the impending arrival of their second baby in a sweet video on TLC, but didn't reveal too many details.

"We are ready to double the fun at our house!" the couple told TLC. "Being parents has already proven to be a greater joy than we had hoped or imagined. We love getting to parent together and are loving every moment and milestone. We are very happy that our little family will welcome a new addition later this year. Children really are a blessing from God!"

So far the little family has only said that their baby will be born "later this year," but with a little math, you can figure out when Kendra could be due.

Typically, according to HealthLine, expectant parents wait until the second trimester to publicly announce a pregnancy. If they followed this, that would suggest that Kendra is about three months pregnant right now. And if that's the case, she has about six months before baby #2 makes his or her debut into the world, meaning Kendra is likely due in mid-to-late September or early October 2019.

Kendra followed a similar pattern with her first child, revealing that she was pregnant on the Duggar family blog in December 2017. She welcomed son Garrett in June 2018, six months after the initial announcement. Kendra and Joe revealed the baby's sex to Us Weekly two months after she confirmed that she was pregnant. At the time, Kendra and Joseph told Us Weekly, "Wow! We are so happy to learn that our firstborn is a boy!" Of course, Counting On fans are likely hoping she will do the same this time around, but she may follow in sister-in-law Jessa Duggar's footsteps and hold off.

The couple's pregnancy announcement included an adorable photo of them together with son Garrett on Joseph's shoulders while Kendra holds a gold balloon that read, "Baby."

In the video announcement about their second child, Kendra shared that she was "shocked" at first to learn that she was pregnant again. But after that wore off, Kendra said they were just "super excited... It was just so many emotions. We're so thrilled."

Joseph expressed a similar sentiment in the video. He said in the clip that he was "really excited" about the baby and added that he hopes their second child is just "like his mommy." How sweet. It's unclear if Joseph intentionally or accidentally used male pronouns to refer to the child.

Hopefully Joseph and Kendra are getting ready for what's ahead; after all, their son Garrett is still under a year old. The couple welcomed their 10-month-old son in June, according to People, so it's definitely going to busy in their house in the coming months.

Counting On fans obviously can't wait to meet the newest arrival to Kendra and Joseph's adorable little family. And their baby will be here before you know it and is sure to be cutie, just like their big brother.