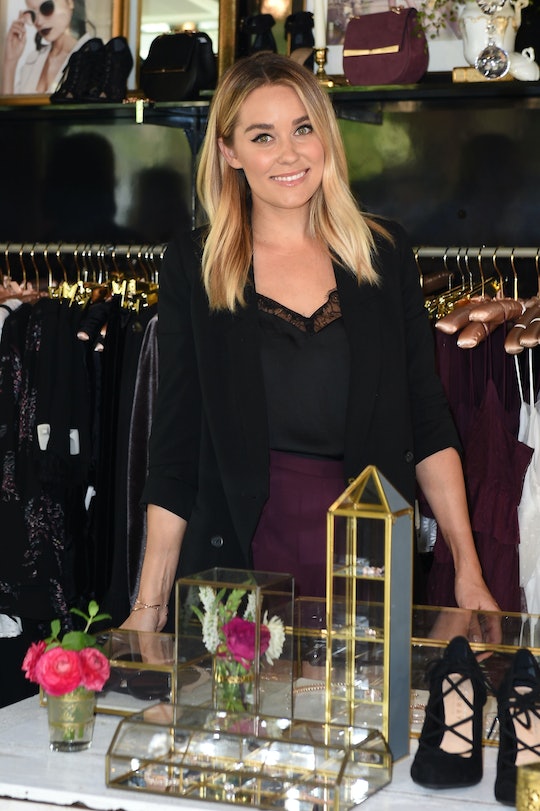 Oh happy day! On New Year's Day, Lauren Conrad announced on Instagram that she's pregnant with her first child. Of course, fans were quick to ask when Lauren Conrad is due, especially when posting such a sweet Instagram of her baby's ultrasound photo. Eagle-eyed mamas will notice that it's not a traditional ultrasound photo, either. The photo isn't black and white and it doesn't appear to have any of Conrad's medical information on it, as most regular ultrasound photos do — and would totally provide the info needed to calculate Conrad's due date. Even the Lauren Conrad blog hasn't spilled the beans on when her first baby is due.

Her Instagram post only features a picture of a baby chillin' out in utero, set against a rustic wood background. "Happy New Year!" read her Instagram caption. "I have a feeling 2017 is going to be the best year yet..." Also featured in the photo is a sparkly gold speckled thumb nail. Confession: I kind of want to know where she got her nail polish more than her due date. But I digress...

Even though Conrad or her husband, William Tell, haven't announced their baby's due date, there are plenty of clues.

There's no medical or measurement information on Conrad's ultrasound photo, but her ultrasound photo looks like a lot of other week 12 ultrasound photos, which would make sense given the timing of Conrad's pregnancy announcement. (Typically, many women and couples choose to wait until they've made it into the second trimester before announcing a pregnancy.) According to Parents Magazine, that put's Conrad's baby in the "passion fruit" stage of baby size during pregnancy.

Further detective work means that if Conrad is around 12 weeks pregnant now, her baby will most likely arrive 28 weeks later, or sometime in July. Looks like The Hills star and Lauren Conrad Celebrate author will have either a Cancer or a Leo baby on her hands! Representatives for Conrad did not immediately return Romper's request for comment on her due date.

Conrad's fans have already begun to brainstorm ways that she can expand her fashion brand with a baby on board: Lauren Conrad maternity clothes, anyone? Or perhaps an exclusive Lauren Conrad line of baby clothes and nursery decor? Even if we don't know when she's due, fans can count on the fact that whenever her baby gets here, he or she is going to be one of the most stylish babies on the block.