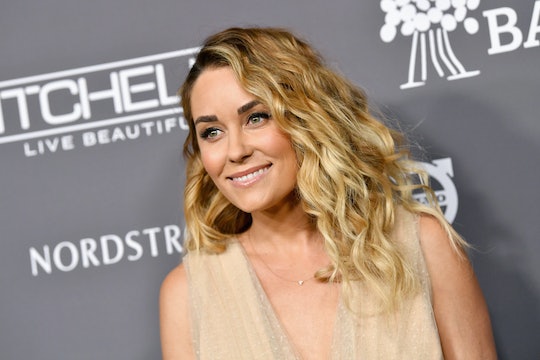 Fans of mid-'00s reality TV for burgeoning feminists, rejoice, there's some extra exciting news circulating about one of your favorite Laguna Beach stars today. After revealing she's pregnant with her second child in a post on Instagram, many fans of The Hills are likely wondering when Lauren Conrad is due this time around. With the help of a little math, here's when you can likely expect the mama-to-be to give birth to her bundle of joy.

Earlier today, Conrad — who welcomed her first child, a son, with husband William Tell in 2017, according to People — posted a photo of herself standing to the side, cupping her tummy and looking down. In it, she's wearing a white floral dress, and the background is baby blue. "It’s been hard to keep this one to myself! Very excited to share that our family will be getting a little bigger this year," she captioned the sweet photo announcing her pregnancy news.

There are very few details available regarding her second pregnancy, but it's exciting nonetheless. Could the baby blue background be a signal as to the sex? Maybe... If anyone was going to be that stealthy and detail-oriented, it would be Conrad, after all.

But given that looking at someone's bump size it isn't fair, or exact science, as to how far someone is in a pregnancy, we'll have to wait to see when exactly she's due.

However, given the timing of her announcement, it is safe to assume Conrad is as at least three months along or farther, as most people don't announce until that point, according to Today's Parents. So with that said, it's possible that Conrad is due sometime this upcoming fall, perhaps in October.

Conrad has previously been open about wanting more kids with her husband, but she was undecided on the timing. At the end of last year, she told Us Weekly that she will “probably” have more kids but “not right now," given that, at the time, she was working hard on her fashion collection with Kohl's. Ironically, Conrad may have gotten pregnant only a few months afterwards. Regardless, it's clear that she and Tell are beyond excited, and that she loves motherhood as much as her career.

The year her son Liam was born, Conrad told People that parenthood is the "best and hardest thing you'll ever do." She added, “I took a photo of [Liam] yesterday, I’m trying to take a monthly photo — all of the good moms do it — I’m really trying. So I took it and I looked at it next to his 1-month photo, and he had just changed. Like he was a completely different baby, and I was like, ‘Oh my God.’"

Conrad went on to tell People, "Honestly, it’s exactly as everyone describes it. It’s the best and hardest thing you’ll ever do... It’s amazing. You fall so in love with your tiny person — it’s a whole new life.

Though it's undoubtedly exciting that she's adding to her brood, Conrad isn't exceptionally public when it comes to raising her kids. She told Fit Pregnancy earlier last year, "I'm going to have to figure out how much of motherhood to share on social media. Obviously you want to protect your child in every way you can. At the same time, my brand is based on being accessible and sharing the milestones of my life, and I'm so excited about it all. I'll find a middle ground."

Be that as it is, we might not be seeing those month-to-month updates about Liam or his little brother or sister, but we definitely have some dreamy, stylized family photo shoots to look forward to... because this is still LC, after all.