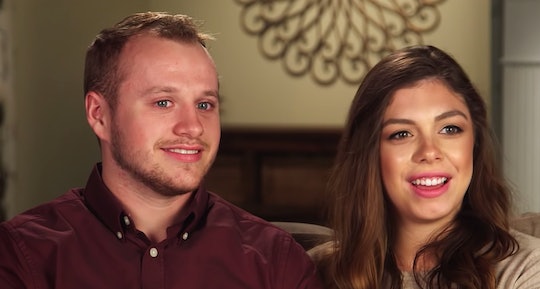 It's practically a Duggar baby boom! If it seems like every time you turn around, yet another Duggar is announcing a pregnancy — then you'd actually be correct. At least lately, that is. That's because so far this year, multiple Counting On stars have revealed they're expecting their own bundles of joy. (Which makes sense, considering about half of Michelle and Jim Bob's children have reached adulthood by now.) And it looks like yet another pair of newlyweds has some exciting news to share. So when is Lauren Duggar due? The Counting On star has announced she and Josiah are expecting their rainbow baby.

After revealing the exciting news to People, the couple shared their pregnancy announcement via Instagram on Monday, May 20. "We are so excited to announce that baby #2 is on the the way!!!! It’s hard to fully express just how grateful we are for God blessing us again with another precious gift!" Lauren and Josiah wrote on Instagram, alongside a series of photos of themselves holding a sonogram.

The announcement continued, "So, as we rejoice of the life of our second sweet baby, we also remember (balloon as symbolism) our other sweet baby, Asa, in heaven. God is so incredibly good!"

As far as when their rainbow baby will be arriving, the parents-to-be shared this detail with People.

"God’s faithfulness to us in our most difficult moments has sustained us and brought us such love and comfort," they told the publication. "We cannot begin to tell you how much we are looking forward to holding this baby in our arms this fall."

So there you have it! I wonder if this little one will arrive in time for Halloween? (Not that the Duggars celebrate this particular holiday ... But still.)

Lauren suffered miscarriage in October, according to E! News, something the couple has remained open about.

"Lauren and I were actually preparing for a trip to go to a friend’s wedding," Josiah explained in February, during a video for Counting On, as People reported. “She started feeling really sick and started noticing some different things. Mrs. Swanson was there, so she was able to help her out. I didn’t know exactly what was going on.”

"I wasn’t feeling well. I was cramping really, really bad, which was quite strange because I normally don’t," Lauren recalled. "I was thinking maybe I had something that had gluten in it... It was late at night and I went to use the restroom and there was the baby. Gone. I couldn’t believe it and I was hoping it wasn’t true."

Josiah and Lauren also shared the heartbreaking news with their Instagram followers in February. "Many of yall don't know this, but a couple of months ago we found out we were expecting, however, soon after we miscarried," the couple wrote. "At first, we kind of wanted to just stay quiet about the news, but knew that since everyone is anticipating for us to announce that were having a baby, we felt like it was time that we told everyone that our first and only baby is in heaven. The message continued:

It is hard to hear when people asks us if we are expecting, when we only recently lost our baby. You can imagine it was devastating to the both of us.

In case you've lost count, let's take a roll call of all the other Duggar siblings who are expecting a child at the moment.

In January, Jessa and Ben Seewald revealed they will be having baby number three, according to E! News. And in April, Joseph and Kendra Duggar announced they're expecting their second child. Not long after that, Joy-Anna and Austin Forsyth announced the impending arrival of their second child and Anna Duggar revealed she's pregnant with her sixth child. That makes a grand total of five Duggar pregnancies — as far as we know. (Who knows? Maybe John David and Abbie Duggar and/or Jeremy and Jinger Vuolo will also have some news of their own in the near future!)

Either way, I'm sure fans are incredibly excited for Josiah and Lauren to welcome their little one this fall. Congrats, guys!