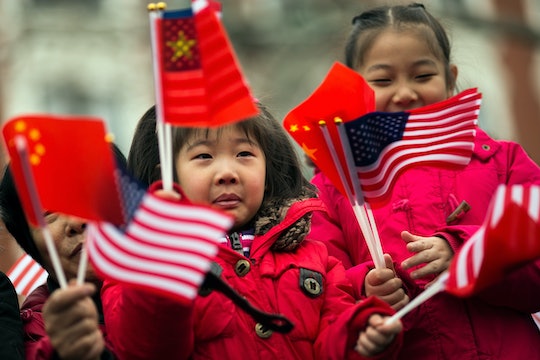 January 1 Has Come & Gone, But The Lunar New Year Doesn't Start Until February

Although it may feel like the holiday season just ended, one of the biggest celebrations in the world is about to take place soon. So don't put away those party supplies just yet. When is Lunar New Year 2019, and what should you know about it? This massive holiday is just around the corner.

Also known as the Spring Festival or Chinese New Year, the Lunar New Year marks the beginning of a new year on the Chinese lunisolar calendar, according to Time and Date. Because this calendar is based on moon phases, the date of the annual celebration changes from year to year. So for this year, the Lunar New Year starts on February 5th, 2019, according to ChineseNewYear.net. It also marks the beginning of the year of the pig, which is associated with wealth and fortune, as further explained in ChineseNewYear.net.

For people in the west, it might be difficult to understand the massiveness of this holiday. An estimated two billion people celebrate the holiday in some way, and the Lunar New Year is a national holiday for countries such as mainland China, Indonesia, and the Philippines, according to China Highlights. Also, this celebration causes the largest annual human migration on earth, also known as the Spring Festival Travel Rush, when many people return home for the holidays or use the time to travel, according to Travel China Guide. In other words, this holiday is a seriously big event for about one quarter of the world's population.

As you might expect, the celebrations that go along with this holiday season are equally fantastic. First, there are the fireworks. Traditionally, the fireworks were used to frighten off evil spirits, but now fireworks are an important part of the new year tradition, as noted in China Highlights. Next, all kinds of delicious foods are enjoyed at this time. Spring rolls, dumplings, steamed fish, and rice cakes are only a few of the traditional foods associated with the Lunar New Year, according to ChineseNewYear.net. Hey, any party that includes tons of dumplings is fine by me. And for the children, red envelopes packed with money are a common gift during the festivities, according to China Highlights. It's a lucky gift for the recipient, and a way for the giver to share their blessings.

But mostly, the focus of the Lunar New Year celebrations is family. The reunion of family members is a key part of the celebration, as noted in Asia for Educators. Of course, this can mean a little awkwardness and social pressure as well. In fact, there's even a market for "rent-a-dates," or pretend partners you can bring home to meet the parents for Lunar New Year, as noted in What's On Weibo. (Hey, the pressure to pair up is real, and some singles are just over it.) Setting off fireworks, spoiling the kids, indulging in rich foods, and fending off nosy relatives — it looks like plenty of holiday traditions are universal. Hope you all have a wonderful Year of the Pig, everyone.