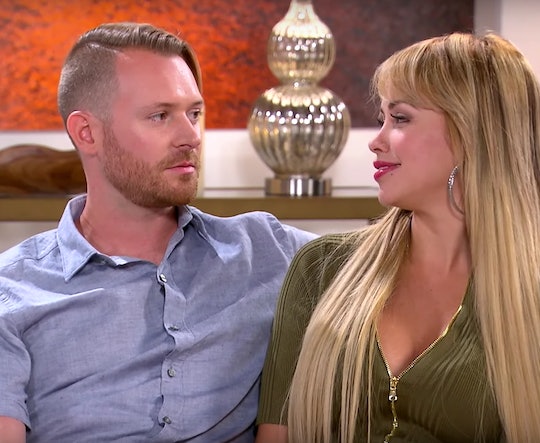 Paola & Russ From '90 Day Fiancé' Have A Baby On The Way! Here Are The Deets

Paola and Russ Mayfield of 90 Day Fiancé are taking things to the next level. On Wednesday, the couple announced that they are expecting a baby together, and they seem so excited. Fans of the couple are likely wondering — when is Paola from 90 Day Fiancé due?

“This is the most amazing feeling ever! We can’t believe we are going to be parents — we are already so in love with our baby,” Paola and Russ told Us Weekly in an interview. “We are ready for this new adventure and we know it will bring us closer together. God has blessed us again, and this time, we are going as strong as our baby’s heartbeat!”

They also released a fun photo to announce Paola's pregnancy. In the picture, they are sitting on a bed surrounded by a bunch of food and some baby clothes, while Russ reads Dad's Guide to Pregnancy For Dummies. Unfortunately, the couple did not disclose Paola's due date. Many expectant parents wait until they are about three months along to announce a pregnancy, according to BabyCenter, so if Paola and Russ followed this custom, that would mean she is due sometime in January or February 2019.

As the couple mentioned in their statement to Us Weekly, this is not the first time Paola, who moved from her home country of Colombia to be with Russ, has been pregnant. Earlier this year, the TLC star suffered a miscarriage, which her doctor discovered was due to her rare combination of having O negative blood and being Rh positive, In Touch Weekly reported. According to the Centers for Disease Control and Prevention (CDC), if a mother is Rh negative but her baby is Rh positive, "the mother’s body can make proteins that may harm the baby’s red blood cells," meaning she may need special treatment to prevent harming the baby. The CDC recommends all pregnant women get tested for their Rh factor.

Paola opened up about her miscarriage on 90 Day Fiancé: Happily Ever After? She said, according to In Touch Weekly:

A couple of weeks before traveling to Colombia, I found out pregnant. And two days after had to go to the emergency room and I had miscarriage ... The happiness I felt when I found out I was pregnant was happiness I've been looking for my whole life.

It's clear that Paola has wanted to be a mom for a long time, and based on the video the Mayfields recorded for TLC, they are so excited to finally be parents and start their family. "The happiness I felt when I found out I was pregnant was the happiness I was looking for my whole life," Paola told TLC.

Before their happy news was announced, some 90 Day Fiancé fans apparently had some doubts about Russ and Paola's relationship, Newsweek reported. During the show, according to Newsweek, some viewers thought that Russ came off as jealous and protective of his wife in a way that hindered her modeling career, while others thought that Paola was using Russ for his money. Russ responded to these whisperings earlier this month in a lengthy Instagram post, explaining that he's not as jealous as the show made him out to be, and that Paola does not love him for his money. He wrote:

The mere glimpse of our lives shown doesn’t always show our best moments but impressions and expressions from our cultural differences and how we are coming together as an even stronger couple.

Hopefully Paola will keep fans updated on her pregnancy and drop hints about her due date sometime soon. Perhaps a 280 Day Pregnancy special is in order!